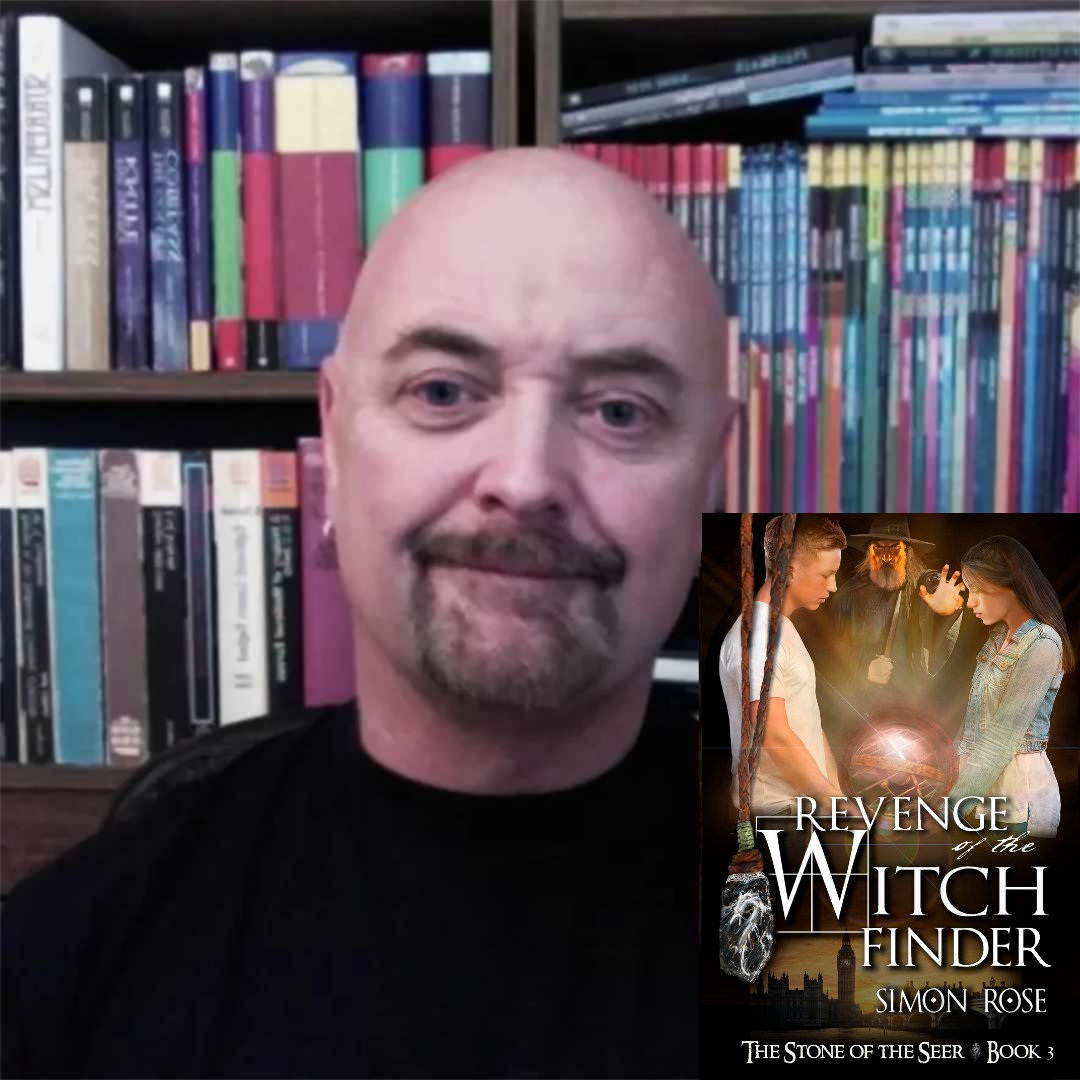 Simon Rose is from Calgary and has published eighteen novels for children and young adults, eight guides for writers, more than a hundred nonfiction books, and numerous articles on a wide range of topics.

Although this is the final part of the Stone of the Seer series, remind us of what it’s all about?

The Stone of the Seer is young adult historical fantasy series. The exciting story is mostly set in the mid-seventeenth century during the English Civil War. In The Stone of the Seer, the first book in the series. Lady Elizabeth Usborne, Kate, and Tom encounter a magical stone, mysterious parchments and manuscripts, and an incredible time viewing device. In part two, Royal Blood, Lady Elizabeth, Kate, and Tom are in London, witnessing the political turmoil at the time of the Civil War, including the king’s trial and execution. In both novels, the main characters are threatened by the witchfinder, Daniel Tombes. There are numerous twists and turns, until the story’s cliffhanger ending, but all is resolved in the final installment.

Sounds amazing. So how much can you tell us about the story’s conclusion?

Well, without giving too much away, Revenge of the Witchfinder takes place in multiple time periods. The story features weird dreams, disturbing visions, parallel lives, and a bewildering identity crisis, as the lead characters discover to their horror that not even the passage of centuries can prevent a bloodthirsty witchfinder from the 1640s from seeking his deadly revenge. Readers will consistently be engaged and unable to put the book down until they reach the dramatic conclusion.And of course, people will now be able to buy all three books in the series.

And there’s quite a story behind the story, isn’t there?

The story and main characters in the series may be fictional, but they’re based on real events and characters. In the 1640s, Charles I and Parliament went to war over how the country should be governed. The English Civil War led to the king’s defeat, trial, and execution in 1649. There was no monarchy for eleven years, but then Charles II, son of the former king, was restored to the throne in 1660. However, things were never the same again and it had been established that an English king or queen had to have the consent of Parliament to rule the country.

As with the first two books in the series, did you engage in a great deal of historical research for this one?

I did lots of research into the English Civil War, Charles I, the trial of the king and so on, as well as into the other time periods that are a part of the overall story, such as the Viking era, for The Stone of the Seer and Royal Blood. For the third installment, I researched things such as archaeology and excavations, how London has changed from how it looked during the Civil War compared to today, how some areas were damaged or in some places totally destroyed during the Blitz in World War II, all of which was vital to ensure that the story was as perfect as possible.

As I did in The Stone of the Seer and Royal Blood, I’ve included a glossary at the end of Revenge of the Witchfinder. Readers can learn more about the historical events, settings, and characters that feature throughout the story. On my website, there’s a page dedicated to each book in the series, along with links to separate pages featuring information regarding each book’s historical background and links to many online sources. All of this should be even more fascinating for readers, now that the entire series is available for them to enjoy.

Do you have any current projects?

Right now, I’m working on another historical fantasy novel series, this time set in the early years of World War II. I’m also working on another story that takes place in the later stages of World War II, as well as more books in the same genre as my previously published paranormal Flashback series. You can learn more about those books at www.simon-rose.com. I also continue to work on the adaptations of my Shadowzone series into screenplays for movies and TV shows, as well as teaching writing courses at the University of Calgary.

Anyone interested in keeping up to date with the projects that I’m working on is always welcome to subscribe to my monthly newsletter, which you can do at www.simon-rose.com.

You still do other work related to writing and publishing, right?

Yes, I offer coaching, editing, consulting, and mentoring services for writers of novels, short stories, fiction, nonfiction, biographies, and in many other genres, plus work with writers of scripts and screenplays. I’m also a writing instructor and mentor at the University of Calgary and served as the Writer-in-Residence with the Canadian Authors Association. You can find details of some of the projects I’ve worked on with other authors, along with some references, at www.simon-rose.com.

So where can people buy Revenge of the Witchfinder, Royal Blood, and The Stone of the Seer?

I’ll be making some personal appearances at local events in the fall, where people can buy autographed copies of all the books in the series, as well as all the other novels. The latest series can also be purchased at most of the usual places, as follows:

Revenge of the Witchfinder

The Stone of the Seer

Thanks Simon, for being my guest here today and the very best of luck with Revenge of the Witchfinder, and indeed with the entire Stone of the Seer series. I hope that all the books sell thousands and thousands of copies in the coming months.

You can learn more about Simon and his work on his website at www.simon-rose.com, where you can also link to him on social media and at other locations online.