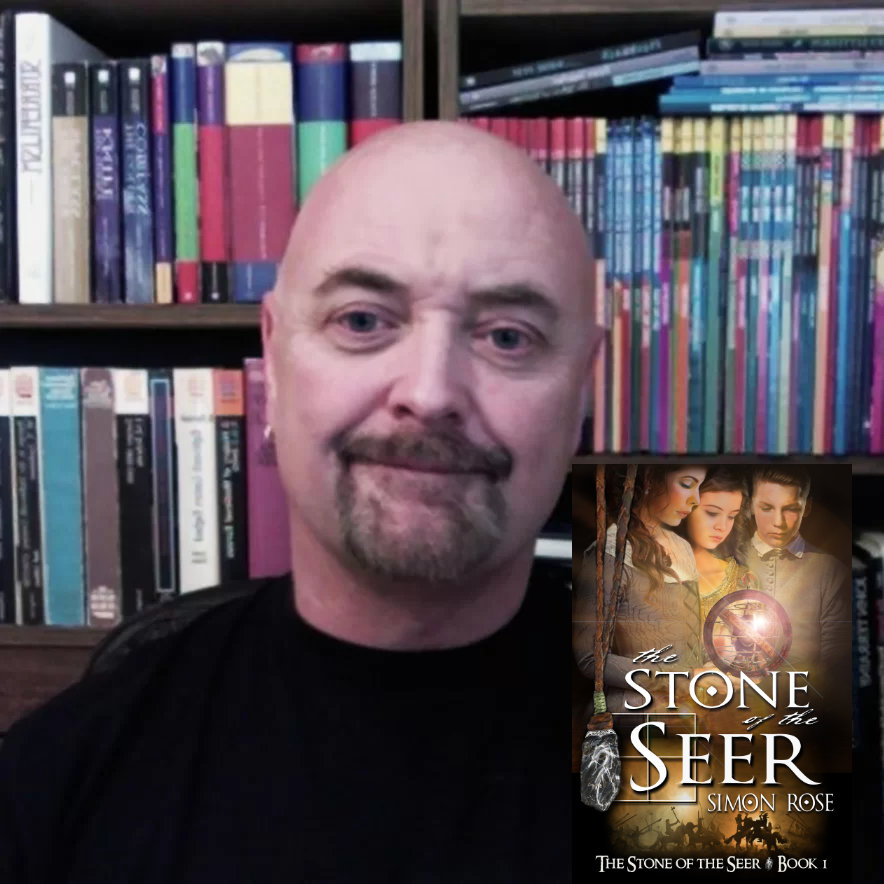 Interview with Simon Rose, author of The Stone of the Seer

Welcome Simon Rose to the blog!

I’m pleased to welcome back Simon Rose to the blog to discuss his new novel, The Stone of the Seer on his birthday too! The last time we had Simon was in 2018 for the Parallel Destiny novel.

Simon Rose is from Calgary, who has published eighteen novels for children and young adults, eight guides for writers, more than a hundred nonfiction books, and many articles on a wide variety of topics. Today, we’re looking at his latest release, The Stone of the Seer, the first novel in the Stone of the Seer series.

So what’s the new The Stone of the Seer series all about?

The Stone of the Seer is an exciting historical fantasy series of adventure novels for young adults, primarily set in the turbulent period of the English Civil War.

The Stone of the Seer, book one in the series, features the Vikings, Leonardo da Vinci, and the political turmoil of the 1640s. At Habingdon House, Lady Elizabeth Usborne, Kate, and Tom encounter a magical black stone, mysterious ancient manuscripts, and the incredible time viewing device known as the tempus inpectoris, all while under constant threat from the murderous witchfinder, Daniel Tombes.

The other novels in the series are Royal Blood and Revenge of the Witchfinder, which will be published in the coming months. There will be a box set including all three novels at some point in the future as well.

And what’s the story behind the story?

The story, main characters, and some of the settings in The Stone of the Seer are fictional but are based on true events and the story features real historical characters, such as King Charles I. The English Civil War was a series of conflicts in England, Scotland, and Ireland in the 1640s and early 1650s. The war originated in the struggle between Charles I and Parliament, regarding how the country should be governed.

The king’s defeat in the civil war led to his trial and execution in January 1649. The monarchy was abolished and replaced first by the Commonwealth of England and then the Protectorate, before the monarchy was restored in 1660. However, the defeat of Charles I confirmed that an English monarch could not rule the country without the consent of Parliament, although this wasn’t legally established until the Glorious Revolution in 1688.

You must have done quite a lot of historical research for this book.

Yes, it’s a time period I’ve always been interested in, but it still involved considerable research. I’ve included a glossary at the end of each of the three novels in the series where you can learn more about the historical events, settings, and leading characters from the English Civil War, locations that are mentioned in the text, life in the seventeenth century, and details from other historical periods that are featured in the story. There’s also a page on my website all about the historical background behind the books, with links to online sources about the time period.

I always have a current project or two and right now I’m writing another historical fantasy novel series set in World War II. I’m also working on sequels to the Flashback series of paranormal novels, which includes Flashback, Twisted Fate, and Parallel Destiny, which you can learn more about on my website at simon-rose.com. In addition, I’m working on screenplay adaptations of the Shadowzone series and have also completed a number of picture books for younger readers, which I hope will be published soon.

You also work with other authors, don’t you?

Yes, I do quite a lot of that these days. I provide coaching, editing, consulting, and mentoring services for writers of novels, short stories, fiction, nonfiction, biographies, inspirational books, and in many other genres. I also work as a writing instructor at the University of Calgary and have served as the Writer-in-Residence with the Canadian Authors Association. You can find details of some of the projects I’ve worked on, along with some references and recommendations, on my website.

So where can people buy The Stone of the Seer?

The novel can be purchased at most of the usual places, as follows:

Thanks Simon, for being my guest here today and the very best of luck with the Stone of the Seer series. I hope the first book sells thousands of copies in the coming weeks and months.

You can learn more about Simon and his work on his website at www.simon-rose.com, where you can also link to his social media sites and other locations online.