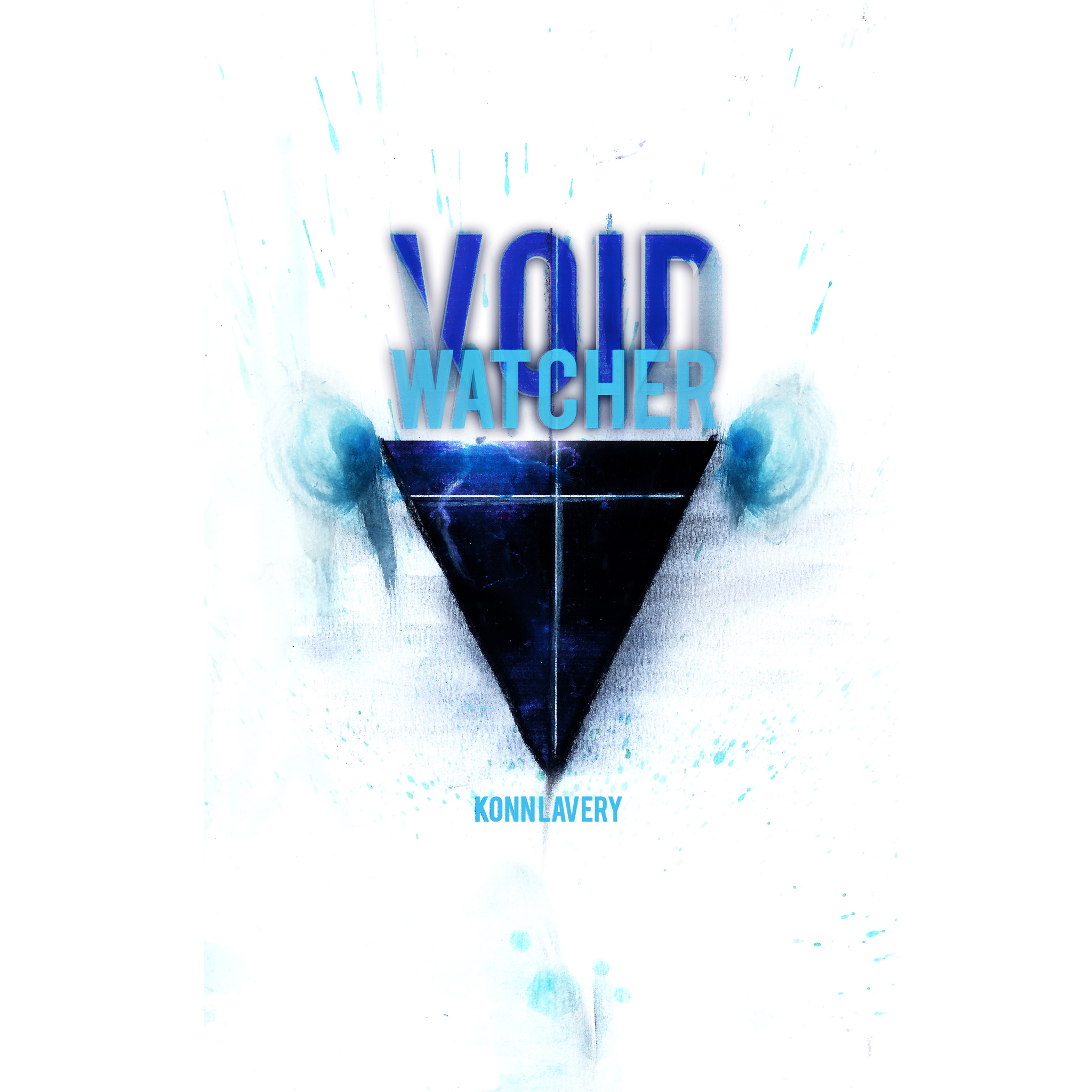 Zea has been a talented illustrator, designing unique characters her whole life. Her mother has always been amazed by the original ideas. For Zea, these ideas aren’t as one-of-a-kind as she’s told everyone.
Void Watcher is August’s Flash Fiction that explores beyond our reality. Experience the story in written word, audio, artwork and ambient sounds.

Goodnight, I love you. Zea heard the phrase every night during her childhood. She would get a kiss on the cheek and a tight hug before being dismissed. The ritual was cute as a kid, but as an adult, it makes her sheepish. Even through the embarrassment, Zea wants her mother to be happy. The woman was never quite the same after Zea’s dad passed. Her mother wants to be directly involved in Zea’s life, so the least Zea can do is say goodnight to her. Hugs and kisses are a lot cheaper than rent, even if it makes her feel like an adolescent. Zea’s mother is far too lenient. She let Zea move back home after college—a blessing and a curse. Mom’s kindness made it too convenient for Zea, who still hadn’t found a job. Dinner was made every night, and laundry was taken care of. Moving back home was a permanent bed-and-breakfast—Goodbye, ninety-nine-cent mac-and-cheese meals.

“Tomorrow is a brand-new day,” Mom says with a warm smile.

“Oh! Before you go to bed”—Mom leans down below her office desk. She lifts an old cardboard box onto the desk with a heavy thud—“I was looking through the basement earlier and came across these gems.”

Mom flips the box open and pulls some sheets of paper out. “You know these.”

“You were such an artist, even then!” Mom says, flipping a sheet of paper over.

Zea stares at the paper, looking at the crude crayon figure of a ghost with an upside-down triangle for a head.

“I have no idea where you came up with these ideas,” Mom says, handing the drawing to Zea. She sifts through the box, saying, “There was that tiger in here that I liked too.”

Zea swallows heavily, staring at the triangle-headed drawing. The watcher, she thinks. The grim memories are still here, deep in the forgotten chasms of her mind. The watcher followed her every night before her dreams. It was the reason why she had a nightlight well into her teenage days. Its words. . . Its . . . teeth. She shakes her head, pushing the thoughts back to the depths whence they arose, and forces a smile, saying, “This stuff is so bad!”

“Talent doesn’t get you employed,” Zea sighs. She hands the paper back to her mother.

“You’ll find a job, dear,” Zea’s mother says, taking the drawing and placing it back in the box. “You are exceptionally gifted.”

Zea leaves the home office and heads up the stairs to her childhood room. She flicks the light on and closes the door. The room is exactly as it was before she left for college. When she first came back, she wanted to remove the boy-band posters and the stuffed animal toys but purposely avoided changing anything in the room. Keeping the childhood items convinced her that she wasn’t going to be here long. Nine months later, here she is.

She turns off the lights and undresses. The blue nightlight automatically turns on, projecting enough brightness for her to find her pyjamas and slip into them. She swipes her smartphone screen, unlocking it, and sets the alarm for the next day. After months of bad sleep, Zea has finally decided to set a timer to get up early each day. Her unrestful slumbers had been making her sleep all morning and well into the afternoon. By early evening, she would have a heavy nap, ruining her sleep cycle for the night, and would repeat the cycle the next day—an unhealthy pattern if she ever wants to get a job. She’s ready to break that pattern.

Zea notices a dating app notification at the top right of her smartphone’s screen. The icon indicates there is a match. It’s probably another dick pic, she thinks. She places the phone on her dresser, telling herself she will check the notification tomorrow. Zea isn’t in a rush to meet a man; she can barely get her own life together. No one will want anything to do with an unemployed deadbeat like her. Well, then again, there are a lot of “fuck bois” out there, as she learned from college.

Zea jumps into her bed, sliding under the covers. She takes a deep breath and lets out a sigh, trying to brush away the constant pressure of being unemployed. Zea knows that her mother is patient with her situation, but she only feels guilt for being here and not having work. She can’t even land an interview. Her portfolio was top of her class at that. Hell, even her instructors were impressed! What am I doing wrong? she wonders.

Her mind drifts. She takes deep breaths in through the nostrils and out the mouth. Supposedly, this is the better way to breathe. Zea’s brain always runs a thousand thoughts a second before bed. The moments just before sleep is the one time she is not doing something. The downtime gives her brain a chance to play catch-up, reflect upon the day, the regrets, the observations, and think about the wishes of tomorrow. This is why she practices deep breathing. The stillness helps calm the body.

Nose in, mouth out.

After what seems like a good eight dozen breathing cycles, Zea’s thoughts turn fuzzy, and her body relaxes. The worries of today and the uncertainty of the future fade; the guilt of staying with her mother and not paying rent wash away. The stress of being single and making no use of her college degree is of little concern now. There is only Zea, the bed, and the blue glow of her nightlight. With another exhale, the walls dissipate. Her eyes lock on to the blue-tinted speckles of the ceiling. Her limbs are jelly, and her breathing pattern enters autopilot. At some point in the process, the room goes dark. Her body lightens, as if she has left this reality. Her thoughts dissolve into the abyss, leaving her to observe the dream world. She begins to drift through the empty, black space. She is weightless and free. The physical constraints that bound her during the day cease to exist.

“Welcome to the other side,” a raspy, deep voice says in her mind.

A loud thud comes from the bedroom door.

Zea’s eyes twitch open, and she attempts to move them to the sound’s origin. They don’t budge in their sockets. She can only see the upper half of the door frame from her peripheral view, due to the angle of her head. Zea tries to move her eyes again with no success. Despite her best efforts, she can’t adjust the position of her eyes in her skull.

What the . . . ? she thinks. The words in her mind are supposed to project from her mouth, but she only makes caveman groans from her throat. Her jaw and lips do not respond. Some saliva oozes down her chin. Zea attempts to use her tongue to grab the liquid. No luck. Her tongue is as useless as her eyes. The door to her bedroom creaks open, revealing a black hallway beyond the frame. The blue glow from her nightlight shines abnormally bright, increasing the contrast of light and dark. An immense invisible force pushes onto Zea’s chest and limbs, sinking her deeper into the bed. She tries to scream, only to make more caveman sounds.

I can’t breathe! Zea cries in her mind, feeling a lack of air enter her burning lungs. Her voice is nothing but gurgling gibberish, despite the clarity of her thoughts. The force on her body continues to press into her being, pushing her deeper into the bedframe. The mattress morphs into a tar-like substance, absorbing her.

A white shape enters the room, gliding closer to her. From her peripheral view, it looks like a body draped in a white robe. The head, on the other hand, is an upside-down triangle with glowing blue orbs resembling eyes; these orbs hover above the two higher points of the geometric shape. The triangular head floats on the body as a mouth appears from the lower point of the triangle, stretching up to the blue orbs.

Someone help! Zea attempts to talk again, but gurgling is the result. Her limbs fail to respond as she tries to spring from the mattress. She is in an unresponsive body, watching while the being glides towards her bedside. The elongated mouth reveals razor-sharp teeth and a red snake-like tongue.

“We have watched you from the Void since your childhood, Zea,” the being says, the skin moving like rubber.

The being leans closer, multiplying the invisible force. No air enters her lungs as she helplessly stares at the triangular head.

“Your mind remains intact with this world and the next. You are attuned through your two-dimensional visions. You are awake. This is why we remain in contact throughout your realm’s years. The Void has waited for your visions to grow stronger. The All-Being Entity awaits you, my Oracle.”

An arm-length form pushes from underneath the being’s robe, followed by three sharp grey claws. “The time is now, Oracle. I have come to open your mind to speak with the All-Being Entity directly,” the creature says in a cold tone, the claw reaching for her.

The claw—inches away. “You will initiate absorption.”

“No!” Zea screams as the mattress rises to its normal state. Her body becomes hypersensitive, a chill creeping across her skin as she springs from the bed in a sweaty mess. Her eyes widen to see that the blue nightlight has returned to its normal value. The pressure on her body ceases as her motor functions return. She kicks the white sheets away. The triangle-headed being is gone. No one is in the room, nor is the door open.

Zea rubs her forehead, feeling an intense headache pulsate throughout her skull.

Some things never change, she thinks.

Breathe through the nose and out the mouth.

Sleep paralysis, she tries to reassure herself. But she sees the small scratch on her arm.