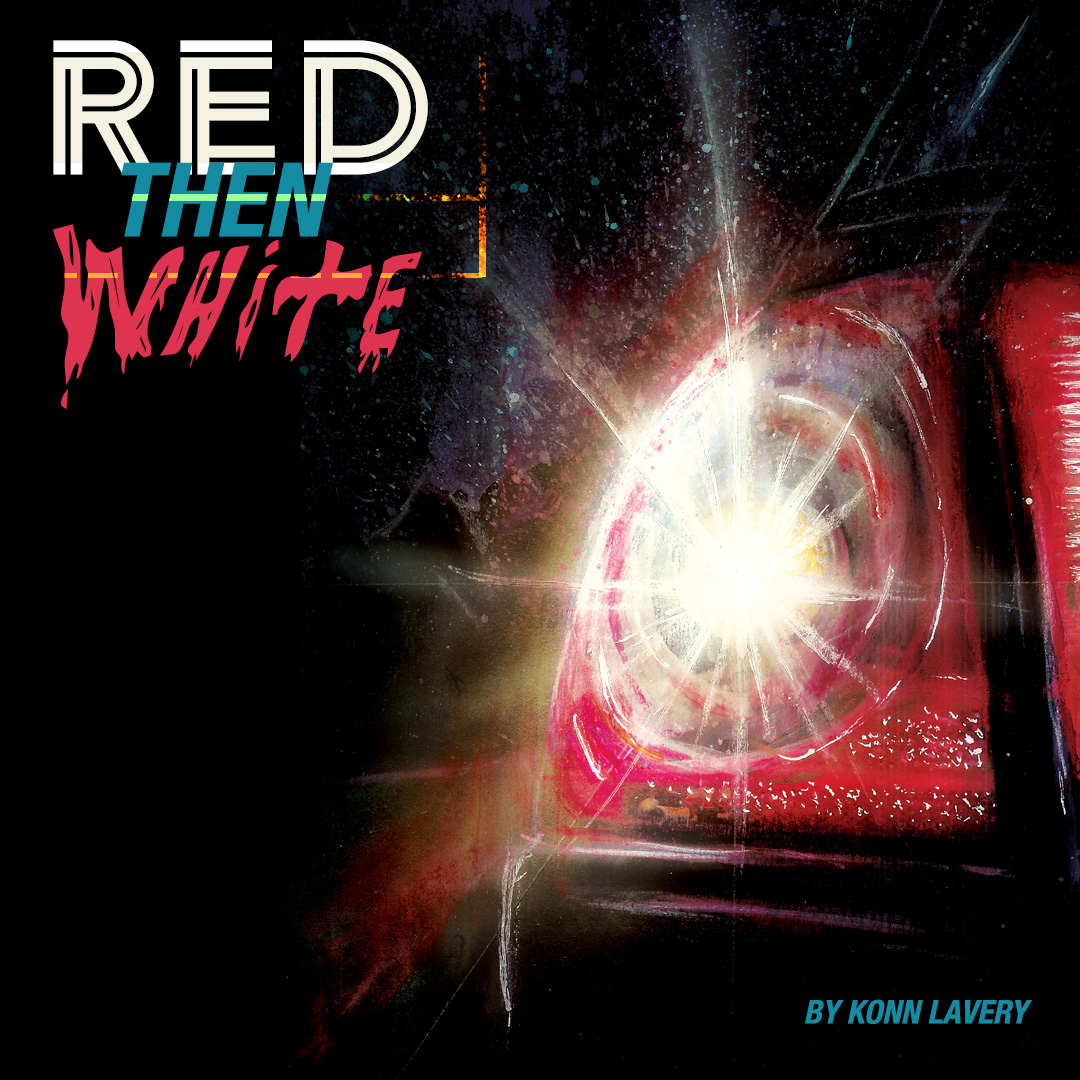 A cruise on the highway to Jasper is a pretty regular thing for Canadians to do. Vehicles stopped dead on the highway are not normal. Neither is your radio spontaneously turning on then playing distorted chanting. What’s with the random lighting too? Red Then White is this month’s flash fiction explores the paranormal. Experience the story either through audio or through reading.

The sound of fingers tapping a touch screen and the constant humming of an SUV are the only sounds. The vehicle glides down the pitch-black highway underneath the star-filled sky. Thin, elegant fingers with monster-green nails scurry against the lit smartphone. The driver keeps both hands on the wheel, focusing on what little he can see in the darkness. The vehicle’s high-beams provide some visuals of the road, but truthfully, if something were to jump out on the side from the ditch, the vehicle couldn’t stop in time—not at these speeds.

“I hate nighttime driving,” the driver says, stroking his neck with one hand. A flash of lightning briefly lights up the night view. The mountains go on forever.

The passenger stops typing and brushes her blonde hair with her hand. “Mason, I know. We don’t have that much longer.”

Mason sighs. “I still can’t believe your boss didn’t give you the day off. We’ll be driving most of the night.”

“No, really, it will be fine. We only have a few more hours left. We’ll be in Jasper in no time.”

Chloe continues tapping away on her phone. TAP TAP TAP. “I’m just making a post on the event page right now. Besides, we’ll have all day tomorrow to catch up with everyone.”

“I get that. It’s just that these reunions don’t happen every year, you know?”

Chloe finishes typing on her smartphone, looking up at the hilly road leading west. Two red lights are visible farther ahead.

“You sure we’re still on highway sixteen?” Chloe asks.

Mason nods. “Yeah. It’s the main road leading to Jasper. Driving in a straight line is pretty simple when you think about it.”

“Just checking. No need to get snarky.” Chloe folds her arms.

The SUV is going about five kilometres over the speed limit. This late at night, the highway is crawling with peace officers just waiting for someone to misbehave. Even five over is living on the edge. Plus, it’s dark, and it’s better to drive cautiously, even if stopping isn’t exactly possible.

Mason tightens his grip on the wheel as the radio lights up with fuzzy noises. “YUK-YUK-YUK-ACH-ACH-UCK.” He relaxes his grip. It seems the dark has him a little more nervous than he anticipated. Something resembling screams shortly follows the strange sounds. Truthfully, it all sounds like noise from the distortion.

“What are you playing?” Chloe asks, reaching for the radio.

“I didn’t turn on anything,” Mason says. “It’s probably picking up a bad signal. Cheap radio.”

Chloe presses the power button, shutting off the hideous sound, then returns to her phone. The tension they’d just had ends with a silent treatment. The two remain quiet for what seems like ten minutes when, in actuality, it is only a few. Time has a funny way of elongating minutes on road trips when you’re bored or nervous. The red rear lights of the vehicle ahead grow larger.

Chloe looks up from her phone and squints. “How fast are you going?”

Mason double-checks the speedometer. It is still hovering at 115. “Five over.”

“Maybe the night has him more spooked than it does you.”

Before Mason can reply, the distance between their car and the red lights of the vehicle ahead diminishes drastically. It’s right in front of them.

“Christ!” Mason shouts, heart skipping. He swerves into the opposite lane, missing the parked car by a few meters.

“Holy shit!” Chloe puts her hand on her chest. “What was he doing, stopped right in the lane? He should pull to the side.”

“Should we call it in? Maybe they’re having a heart attack.”

A flash of light bursts from the sky, lighting up the roadway. Lightning, yet no rain or thunder. Mason points to a sign on the right side of the road, lit up in the high-beams. It states “ALBERTA 16” with the numbers inside a shield. Very Albertan.

Chloe folds her arms. “It just doesn’t look familiar this late at night.”

“Nothing does at this hour,” Mason says, adjusting the wheel as they come upon a slight turn. A second vehicle appears. The red rear lights increase in size. It’s worrisome.

“Another one?” Chloe asks.

“I guess?” Mason says, bringing the wheel back, congruent with the straight road.

Chloe reaches for the radio, shutting it off. “Seriously, Mason, what is wrong with this?”

Mason doesn’t reply. He focuses on the lights of the new vehicle, which continually grow larger. The vehicle isn’t moving, just like the last one.

“Mason, move over! We’re going to hit him,” Chloe says.

“I am.” Mason squints, seeing that the red lights are perfectly in line with the middle of the road. “He’s . . . ”

“He’s in the middle of the road,” Mason says, pressing his big toe on the brakes of the vehicle. How strange—two dead vehicles on the highway.

“Move into the shoulder lane and get around him. This is beginning to creep me out.”

“Yeah, me too.” Mason gradually moves the vehicle off to the right, still pressing on the brakes. The vehicle slows to about fifty kilometres. “See if you can take a look,” Mason says, moving halfway onto the shoulder. The vehicle vibrates as the right-side tires drive on the rippled pavement. The new sound accompanying the SUV’s humming is unsettling. Everything about this situation is making both Mason and Chloe want to get out. Driving forward is their only option. Chloe sits straight and looks out Mason’s window as they drive by the stationary car. Anticipation.

“What do you see?” Mason says, glancing at the car as they drive by. He can’t get a good look and returns his gaze to the road, exhaling stress.

“What?” Mason doesn’t believe it.

“No one. The vehicle was empty.”

“It can’t be. It was probably just too dark.”

Mason looks directly into Chloe’s hazelnut eyes for just over a second before returning to the road. She keeps her gaze on him. She’s serious. Chloe never keeps her eyes on anyone that long unless it is her smartphone. She’s certain.

“Can we stop? Just pull over for a moment,” Chloe asks.

“Mason! There are two cars dead on the road, one of which I know no one was in. I just need a damn smoke.”

Mason stops himself from replying. Wise move, for his first instinct is to tell her that they aren’t sure that someone wasn’t in the vehicle. Someone had to be, right? It doesn’t matter. Chloe doesn’t enjoy being challenged when she is convinced she is right. He will never hear the end of it.

“Fine,” Mason says, the vowels forcing their way out of his throat. He slows the vehicle down. The vibrations lessen. “Call the cops. Or have a smoke. Whatever it is.” He presses the flashers button as they come to a stop, putting the vehicle into park. Mason leans back in the driver’s seat and waits.

“Just a quick dart, okay?” Chloe says, reaching into her pink purse with one hand.

“Yeah, cool. I’ll wait here.” He folds his arms, wishing she’d just stop smoking. Mason wants to argue with her about the health hazards, let alone the stench, but there isn’t a point. Smoking is the same as any situation with this gal. When she is set on something, it doesn’t change.

“Great.” Chloe undoes her seatbelt and opens the door with one hand. She flicks the lighter, bringing life to the cigarette as she puffs, halfway out of the vehicle. She always does that. Can’t she light the smoke once she is out of the vehicle? Then Mason wouldn’t have to buy car fresheners all the time. That smoke trail lingers in the seats. Disgusting. Too late now—Chloe is set in her ways. She closes the door to the SUV and steps out of view. Time to wait.

Mason fiddles with his thumbs, looking out the side-view mirror, then the rear mirror to see if he can spot Chloe, but she’s completely out of view. He sighs and looks down at his shoes, then at the clock on the dashboard. It’s 11:15 p.m. He needs a distraction, so he doesn’t think about Chloe’s stupid smoking habit. She’s out there, inhaling a mouth full of cancer.

Okay, that’s enough. Mason unbuckles his seatbelt, opens the door, and steps out into the cool spring air. He rubs his arms, causing the windbreaker to make that annoying squeaky noise, like a kid’s jumpsuit.

“Chloe?” he says, walking around the front of the vehicle. She isn’t anywhere in the front. Mason guesses she has to be by the rear passenger side if he couldn’t see her from inside.

Mason puts his hands in his pockets and walks around the vehicle to the passenger side. “Chloe?”

A beam of light flickers above the vehicle so bright it blinds Mason’s eyes momentarily. The vehicle bounces up and down as the whole scene lights up bright like daytime. Then nothing. It vanishes. The vehicle wobbles slightly. Mason steps back.

“Chloe?” he calls out, moving around the vehicle. No sign of Chloe. Where did she go? He glances back to the side of the road, leading into the forest. It’s pitch black.

He runs around to the driver’s side of the vehicle and finds nothing. The blonde is nowhere to be found. The subtle sound of “YUK-YUK-YUK-ACH-ACH-UCK” comes from inside the vehicle. That damn radio. A women’s scream roars from the speakers.

“Chloe!” Mason shouts, running to the back of the vehicle, looking into the woods. Did someone grab her? Did she run? The light, what was it? Mason can only wonder. That stupid radio won’t shut off, either. His mind is running a million questions through his head. Was she pissed off at him? He has no resolution.

A burst of light flashes. This one is different. An immense suction rips him from the ground. The pressure feels like a vacuum hose sucking his entire body, stretching his skin upward, pulling on his clothing, eyelids, and lips. The light vanishes, leaving him in pure darkness, skin reverting to normal. The light flashes again, revealing the road as a small line below, amid acres of forest. He’s being pulled up into the sky.

“Chloe!” Mason screams as his skin stretches again. The light gets brighter, blinding him. The air is so cold. The suctioning stops as he lands on a suddenly new chrome flooring. Everything is so bright. Red eyes are everywhere, and the haunting voices from the radio begin to chant, “YUK-YUK . . . ”