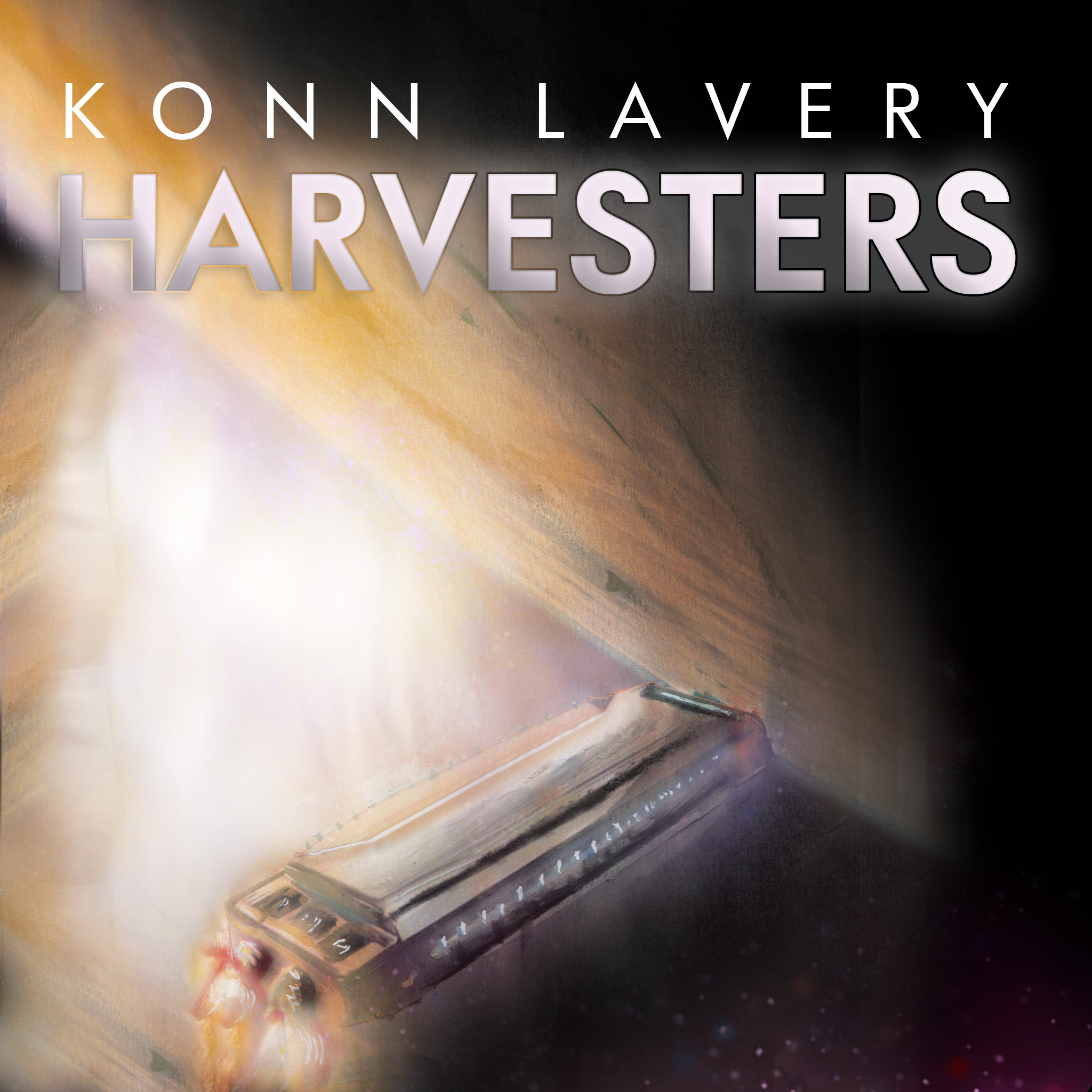 Technological advancements has allowed humanity to join the stars under a single civilization known as The Society. We left out violent nature behind, continuing to deepen our understanding of ourselves and the universe. The Society’s bold progression fails to identify the ghosts of our past.

Harvesters is July’s flash fiction that brings readers into a sci-fi horror where readers are joining a worker in The Society. Enjoy the story in written word, audio, artwork and soundscape.

We’re on the trawler vessel heading to the harvest world, just like any other job. I manage the equipment in the docking bay while we are en route. Two others in our unit are with me. We herd the cattle once they are harvested from the ground squad. I never thought much about the job. My father did this before me, and now this was my role in The Society. That’s all there was to it. The Society keeps things structured and ensures humanity’s survival by improving our wellbeing. So why mess with a good thing?

The trawler vessel rocks side to side as the ceiling lights flash—a sign we are entering the atmosphere. I hold onto the emergency handlebar with my right hand, awaiting the oncoming catch. My two comrades do as well. The adrenaline hits me every time. I know what is coming. The ground squad will bring the cattle here, and our role will begin. The cattle always act up. Our unit has to be extremely focused on coordinating the beasts in the cage for the safety of everyone on the ship.

The ship stabilizes its motion. My grip on the handle relaxes as we enter the planet’s atmosphere. Six units armoured head to toe—the ground squad—march into the chrome oval shuttlecraft, holding their black pulse cannons. Glowing purple lights hum from the chambers. Safety mode is off, and their weapons are ready. The craft’s door closes up as the last unit enters, letting it lift off the ground with a blue light projecting from the exhausts of its underbelly. The trawler vessel opens the docking door, giving us a view of the grey atmosphere of the planet.

A question enters my mind—what is the surface like? The ground squad knows. From what I learned in school, I know it is infested with disease, rubble, and pollution. No wildlife survives there, except for the cattle. But they seem to flourish, luckily for us. The cattle are vital to The Society. Their biological makeup is a crucial component of our scientific progression. Their genetics help us understand our past and improve our DNA. That’s all I know, but it’s enough to make me ponder useless thoughts.

The shuttlecraft roars as the bottom thrusters rotate, letting the craft zoom out of the trawler vessel and into the cloudy grey atmosphere, where it disappears. The harvest has begun. One time, I did get a view of the planet beneath that foggy sky. It’s blue and brown. I saw it from the cockpit, although only for a few moments. I had to return to my station shortly after as we were entering orbit. It’s probably for the better. I need to keep focused on my job if I want to live up to my family’s name.

Now, I wait for the ground squad to return. My left hand clutches the black electro-spear, waiting to shock any cattle that act out in the cages. It makes my heart race thinking about potential action. They have hands; they can operate basic tools. Even though my curiosity about the planet torments the back of my mind, I know I don’t want to be in the ground squad, gathering the beasts. They’re dangerous if not harvested carefully. I’ve seen the footage in school. The paintings. The portrayals in the media. Filth riddles their hair, and their nature is violent. As much as I’d like to be a part of the ground squad and partake in harvesting some of the cattle, I can accept my duty in The Society.

The ground squad doesn’t take long to come back to the trawler vessel. The docking station had remained open for the duration of their absence. Soon, the intercom erupts, with the pilot’s distorted voice coming through the speakers, saying, “Ground squad arrival. Shepherds, initiate.”

The lights above turn blue. The other two shepherds march forward. I follow after them as the shuttlecraft comes into view. The craft carefully lands back inside the trawler vessel as the docking door moves upward to close.

“Positions,” the shepherd to my left—our squad leader—says through our helmets.

I grip my spear with both hands as the shuttle lands. The engines underneath the craft turn off, leaving us in a moment of silence. The back of the ship hisses and the hatch continues to close. Three ground squad members are on each side of the interior, with a large steel crate in the center. It levitates off the ground. Small holes wrap around the middle of the cage, underneath the semi-translucent forcefield surrounding the container. The ground squad marches forward, and the cell hovers ahead with the unit. Groaning echoes come from inside the cage. Snarls and roars. They are in there. Angry. Hateful.

A dark silhouette appears from behind the last ground squad member. The motion is too fast for me to see clearly. The black blob is crouching. It moves closer, yet there isn’t a seventh squad member. That is cattle.

“Free run!” the other shepherds say, joining me in the pursuit.

The ground squad spins around, raising their pulse cannons, the purple orbs glowing brighter. The three on the opposite side hurry around the cage to face the threat. The others fire pulses from their weapons, missing the silhouette by a fraction. The plasma blasts soar past the being, highlighting a humanoid creature standing upright, wearing pants. Muscular arms end in five-fingered hands that hold a crude metal pistol, firing the weapon at the closest ground squad unit. The scene lights up as a bullet rips through the gun’s chamber and into the chest of a ground unit. It bounces off the armour, leaving no indent.

Time slows down as I run. My body’s motion is in autopilot, while mind is left in disarray as I glimpse the scowling face of the cattle in full light. The beige dirt-covered skin. Two eyes. Blue irises. Long black hair. It’s human.

The cattle fires again, missing the ground squad in front of him. They fire back. One of the pulse cannons’ plasma blasts hits him in the chest, throwing him back and knocking the gun from his hand. The two shepherds and I arrive directly in front of the cattle. Our squad leader lunges his electro-spear into the being’s chest, causing his entire system to jolt and fall lifelessly.

I stare down at the cattle. No. It can’t be. I am looking down at a fellow human. The physique is less toned, and it is slightly smaller. That aside, it is undoubtfully human—an unmodified version.