This month’s guest is a major participant in the horror genre through her journalism, interviews, writing and editing since 2006. She has contributed to such publications as Fangoria, GoreZone, Diabolique, Delirium, Shock Till You Drop/ComingSoon.net, Absolute Underground and Cinesploitation. Lacey currently holds the position of communications and media relations coordinator with DEDfest, Western Canada’s exclusive international genre film festival, making her well-versed in the genre and the industry.
Lacey and I got together to discuss her insights into the horror genre as well as some of her own writing career background.

Lacey Paige, thank you for joining us. Give us a quick intro about yourself.

I am a freelance journalist and writer. I write fiction as well as journalistic pieces, and I am currently the communications and media relations coordinator for DEDfest. I am a third-year Bachelors of Communications Studies student at MacEwan University. I graduated from MacEwan’s journalism program in 2013.
The first time I was published was by Venture Publishing’s GRIP magazine in 2006—fresh out of high school. The publication was mostly teen advice columns, so I wrote about my experiences as an angsty teenager.
When I was 16, I attempted to write a novel but gave up about 30 pages in. I discovered Absolute Underground in 2008, so I contacted them to see if they were in need of writers. It ended up being an eight-year relationship, where I was one of the primary contributing writers for a long time; however, gradually my participated has dwindled due to time commitments with other priorities.
In 2010 I found Cinesploitation—a website dedicate to all things genre cinema. Much like Absolute Underground I got in touch with them to see if they were looking for writers. At that time I was just beginning to establish my portfolio. When I first got into genre journalism, my primary focus was to someday have the chops to write for FANGORIA. In 2011 I finally gathered the courage to contact editor-in-chief Chris Alexander. I express interest in contributing, and Alexander asked me what I was interested in writing about, so I inquired as to whether they were interested in publishing something about the late underrated Canadian genre auteur Bob Clark. They agreed and it ended up being my first article for FANGORIA.
Something that I have learned is if you’re passionate about something then you will do it for the love and not just the money, and that can help you get discovered. There are a million other people out there after the same thing as you, so you have to do something to stand out from the herd.

Have you always been a fan of the genre?

Yes, since I was really young. My dad was a big genre fan and he influenced my interests. I grew up during the ‘90s video store zeitgeist. I experienced all of that from my childhood up to my early 20s, when video stores started to vanish. Things were different back then; my friends and I could rent horror movies and the clerks didn’t ask for ID. Additionally, my brothers would scare me—just to be assholes—which contributed to my childhood burgeoning love of horror.

How did you get into the horror industry?

The first horror-centric piece I wrote was a profile piece on a local filmmaker named Matt Acosta, back when he was involved with the Return to Odd festival (which was DEDfest in its earliest stages). 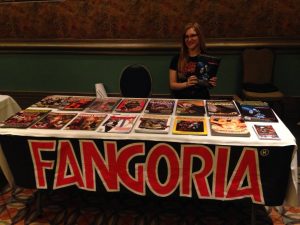 After that I reviewed Dario Argento’s Mother of Tears for Absolute Underground, followed by an interview with the makers of the infamous August Underground series, Toe Tag Pictures. In 2010 I began writing film and books reviews, and interviewing film industry professionals for Cinesploitation.com.

Do you do much of your own fictional writing?

I’ve been so busy with school and all of the communications for DEDfest, which unfortunately leaves very little time for me to focus on my own creative work. I also occasionally write concert reviews for exclaim.ca. Most of the writing I do these days is for school, so it’s very academic. However, I am currently taking a Writing & Publishing Prose class towards my degree electives, which is fantastic because it pushes me to write more creatively—both fiction and nonfiction. I definitely find that I am more of a nonfiction writer by nature.
I sometimes write short stories and poetry, which I aim to be very transgressive and boundary defying with. For example, one of the ways that I try to write creatively when I am strapped for time is through pornographic short fiction—what I’ve coined “Smut-Lit.” It helps me to strengthen my voice, take greater creative risks, and really hone in on the idea of showing rather than telling. One day I’d like to compile an anthology of horror and Smut-Lit short stories.

I think it is very cool you got to interview Tonny Todd, have you gotten a chance to chat with other iconic industry people?

Definitely, tones! Bill Mosley, who has been in House of a 1000 Corpses and The Devil’s Rejects and Repo! The Genetic Opera. He is a very nice and intelligent guy with a diverse background. I’ve also interviewed Tom Savini, the effects guy for Dawn of the Dead and Friday the 13th, and Michael Berryman from the original The Hills Have Eyes. In addition to genre film folk, I’ve interviewed a lot of metal bands both locally and internationally known, such as Matt Harvey from Exhumed and Gruesome, a couple of the guys from Obituary, Alex Webster from Cannibal Corpse, Jason Keyser from Origin, and many others.

What are your thoughts on the general public’s view of the horror genre? Specifically it being filled with a lot of gore-based stories.

The genre really is at a peak for its mainstream popularity. There is an entire subgenre of mainstream horror offerings such as The Walking Dead, Hannibal and American Horror Story that the majority of viewers quite enjoy.
I recently wrote a research paper about the uses and gratifications of habitual horror consumption, which I’m slowly working on revising and preparing for publication through my university’s academic journal. The psychology of “why horror?” fascinates me.
I feel it takes a certain level of intuition and a certain type of personality to be interested in stuff like that. The best kind of horror will always be about the human experience. It might be veiled in metaphors and/or surrealism, but horror—above all other genre—has the power to perfectly and adequately encapsulate the human experience. This is stuff that everyone can relate to in terms of what scares us and what connects as on a survivalist level as a species. Horror taps into the spectrum of love and fear, and I don’t think the average casual viewer recognizes how important these sources are in terms of how they can connect us to one another. As unrealistic as fictional horror may seem, it speaks to the human experience stronger than any other form of entertainment. It also provides a safe outlet for productive and indirect purging of aggression and other inherent human emotions and behaviours.

What is your favorite horror genre?

Psychological horror is my favorite subgenre, so for example Clive Barker’s short story “Dread” from his Books of Blood Collection. The cinematic adaptation disturbs me to the core every time I watch it because it hits to close to home and really plays on that idea of human horror so very well.
I am also a fan of slasher flicks and cheesy alien invasion movies, too, because those types of movies provide escapism and are just plain fun!

What do you think makes horror good?

Effective horror is based around a story or concept that is relatable to anyone.
For example, Session 9 is an effective horror film because focuses on stuff that can and has actually happened in real life. It can happen to anyone, which makes it relatable and disturbingly realistic.

Having such a history in the horror industry, where do you see it going? Specifically in the storytelling aspect.

I have always been deeply interested in the odd or obscure side of life because it has resonated with me from a very young age. When people ask if I watch The Walking Dead, I generally say no. Zombies were never about infection or the return of the living dead. Its roots are grounded in ancient Haitian voodoo practices, and I find modern zombie films have no relation to this. I am not really into modern zombie movies because the subgenre is so overdone. The one I can think of that I really appreciated is Bruce McDonald’s Pontypool, based on Tony Burgess’ book, Pontypool Changes Everything. The concept is a brilliant and almost plausible one that really works on so many levels.
Thomas Ligotti is a very talented underground author, and his work is often compared to that of H.P. Lovecraft. Ligotti is so steeped in the unknown and the incomprehensible; he has this uncanny ability to describe things that the human mind can’t even fathom, while also perfectly encapsulating the human experience of identity crisis and the like.
Horror has risen to the forefront of pop culture with things like fan conventions, zombie walks, and network TV series. I think there will always be that segregation between the underground and the more mainstream horror enthusiasts, similar to metal music where there will always be more mainstream forms of it, but much of it will always be shrouded in obscurity.
I hope the direction of horror gets past this wave of recycled ideas. I would like to see more of a focus on what’s relevant here and now within the social and cultural framework of present-day society. Movies like The Den or Unfriended are relevant because they play off of possibilities and social contexts that people can relate to. Horror can take any modern thing and turn it into a metaphor. Real life is scarier than anything.

What are some of the clichés that you can’t stand?

Underdeveloped characters and plots, and bad dialogue. Of course, there is a certain sub-genre that calls for that sort of thing.

Where do you plan on going next with your career?

Continuing to fulfill my role as the communications coordinator of DEDfest, finishing my Communication Studies degree, and eventually working towards writing and publishing books and works of my own creative writing.
With DEDfest, I am getting a lot of opportunities to go to other places and network with other people in the industry. I think ideally I would like to someday work for a film or music distribution company as a PR or communications consultant of some sort.

Final Thoughts to leave us with

“One of the central pleasures of getting scared is that it focuses the mind. When you experience extreme fear, you forget the rest of the world. This intensity fixes you in the present tense.
Overwhelming terror may be the closest we ever get to the feeling of being born. To put it another way, the good horror movies make you think; the great ones make you stop.”

Thank you Lacey for joining us!
Lacey worked with me on the Seed Me novel as a guest editor to provide some expertise in the genre to better the general plot. She offered insightful feedback into the book and was a great addition to work with along with Robin Schroffel. 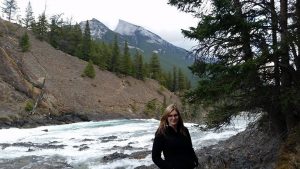 You can find Lacey Paige on the following sites: