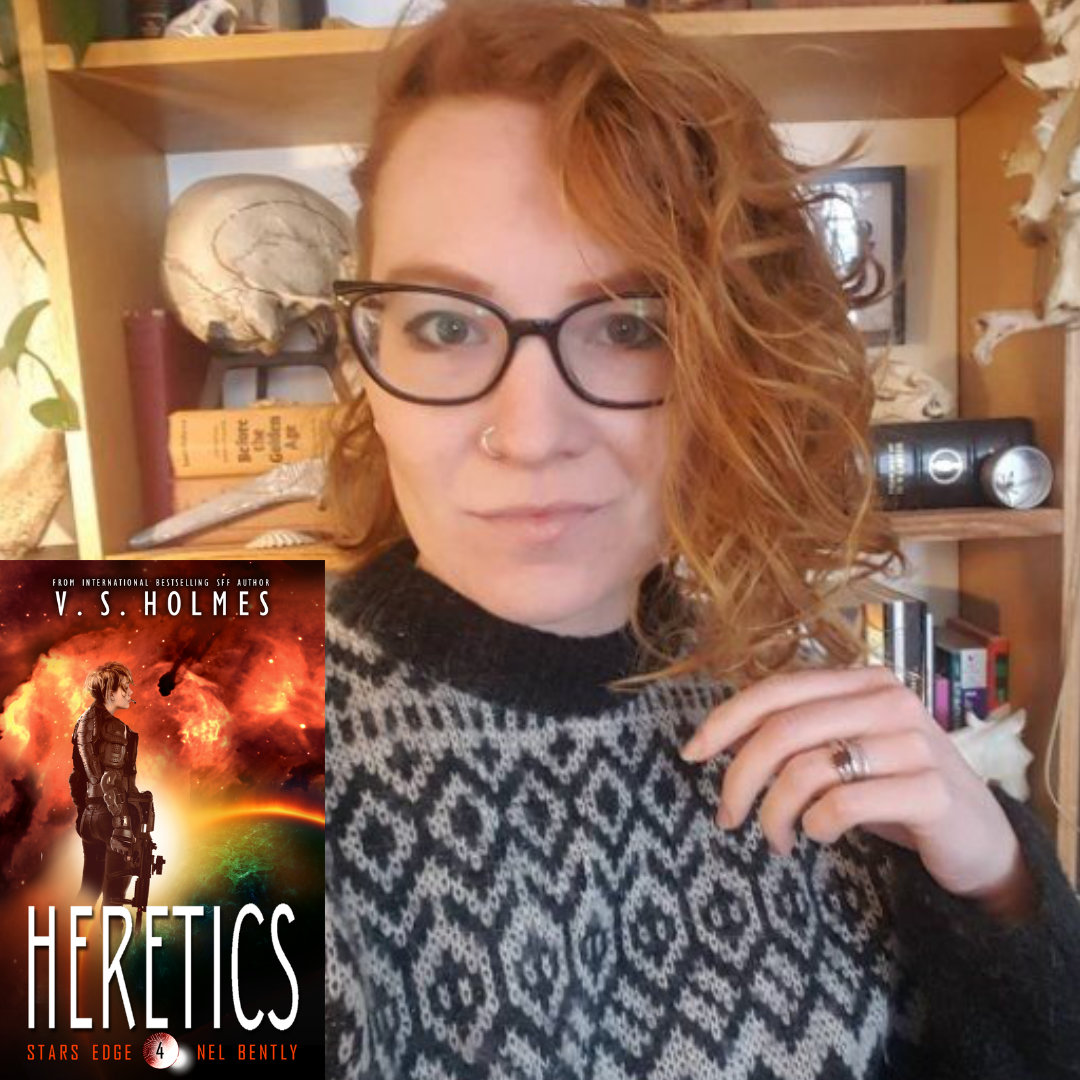 This month we welcome back the award-winning fantasy & sci-fi author V.S. Holmes! Last year they joined us in July to discuss their fantasy series Reforged. Now, we dive into the Stars Edge, Nel Bently, universe with them to learn about the newest book Heretics.

In addition to writing, V.S. Holmes works as a contract archaeologist – cool – throughout northeastern U.S. They also live in a tiny home with their spouse – also cool.

Let’s Welcome V.S. Holmes back to the blog.

Thanks for joining us V.S. Holmes! For those who don’t know, can you give a brief intro about yourself?

Heretics is the latest Nel Bently book in the Stars Edge universe. Tell us about Dr. Nel Bently and her latest adventure, as she is the main protagonist in the series.

The Stars Edge: Nel Bently Books begin with Travelers. Dr. Bently discovers her pristine archaeological site is the center of an intergalactic feud. With her work, her friends, and her life on the line, she’s ready to fight dirty. She’s a hot-tempered and stubborn archaeologist who’s better at digging holes–metaphorical and literal–than she is at dealing with people. Like me, she often jokes the reason she’s an archaeologist is she realized she preferred her subjects dead. Nel’s books explore how where we come from impacts where we’re going, and follow her as she learns how to decolonize archaeology and science.

Heretics, out May 8th, is the fourth of Nel’s adventures, and with this one Nel must join forces with former enemies and untrustworthy allies to save Earth from a deadly radio transmission. She’s stuck between coming home and feeling out of place on the planet that made her. A theme in my work is how we respond to expectations of who or what we should be, both others’ and our own. Nel faces the root of her anger in Heretics and tries to navigate her confusing relationship with high-powered Lin.

The Stars Edge world is a shared universe with author Cameron J. Quinn. As you mentioned before, Dr. Nel Bently once dated Cameron’s character, Tabby. The two have made appearances in both authors’ work. What’s grown over the past year in the Stars Edge world?

The biggest change in the Stars Edge world is actually that Cameron and I have parted professional ways, due to very different business models. She put aside her half to focus on romantic suspense and I took over the Stars Edge label, so while you can still glimpse Tabby and some of the references in earlier Nel books, they’re mostly ghosts. For my part, the core of the world is still Nel’s arc, but there are several spin-offs in the works focusing on some of the side characters–Phil, Dar, Andy, and Jem as well as a few others. My aim is to delve into the history and future of the world’s science. Next up is a serial, based on my short story Starfall, which will be exclusive to my Explorers and center on the relationship between conflict journalist Andy Gull and medic-turned-rebel Jem!

For each book, you’ve developed playlists for the books on Spotify, with Heretics having the latest. Do you write to the chose music, or does curating the right moods and themes come post writing?

While writing, I choose various tracks–often instrumental, but sometimes lyrical–to help me capture the mood I’m going for, whether that’s the adrenaline that comes with escaping an imploding planet in Strangers or the languishing warmth of a New England summer in Drifters. With the more recent books, due to their heavy sci-fi nature, I’ve been more into synthwave and instrumental epics. The playlists on Spotify are curated “highlights” that I feel encapsulate the rollercoaster of emotions throughout the books or ones that really helped me nail down a scene. I’m currently drafting Fugitives, the penultimate adventure, and there are a lot of “epic space music” searches in my YouTube history! As for Lin and Nel, their theme is most definitely “Fly For Your Life” by Gunship. I love me some angsty lesbians that can’t decide if they love or hate each other.

You have both the Regorged and the Stars Edge universes. What’s your favourite part of world building?

Oh that’s such a fun question! I adore the complex political structures that come with ancient kingdoms or organizations–whether that’s the battered cities in Blood of Titans or the 13,000-year-old Institute for the Development of Humanity in Stars Edge. My characters often find themselves in forgotten pockets of these worlds. I’m also a big fan of culture clashes, and very different characters realizing that maybe they have some similarities after all. And, anyone who has watched Dune with me will say that one of my favorite things about world-building is the hats. I’m a big fan of ridiculous fashion.

What’s next for you? Deeper into the Stars Edge world? Back to the fantasy realm of Reforged? Or something new?

Yes! All three! I’m finishing book five of Nel and outlining some key aspects of the sixth and final book. I can’t ever have just one project to focus on, so I’m also drafting a new set of epic fantasy books. While it is, technically, a return to the Blood of Titans world, it focuses on new characters and new places. There will, of course, be some fun–and bloody, let’s be honest–cameos, but you won’t need to have read the first few if you want to pick up the series with these ones first. I’m also working on an entirely unrelated project, a stand-alone gothic fantasy that is dark, and broody, and sexy.

Let’s thank V.S. Holmes for joining us to talk about their work!