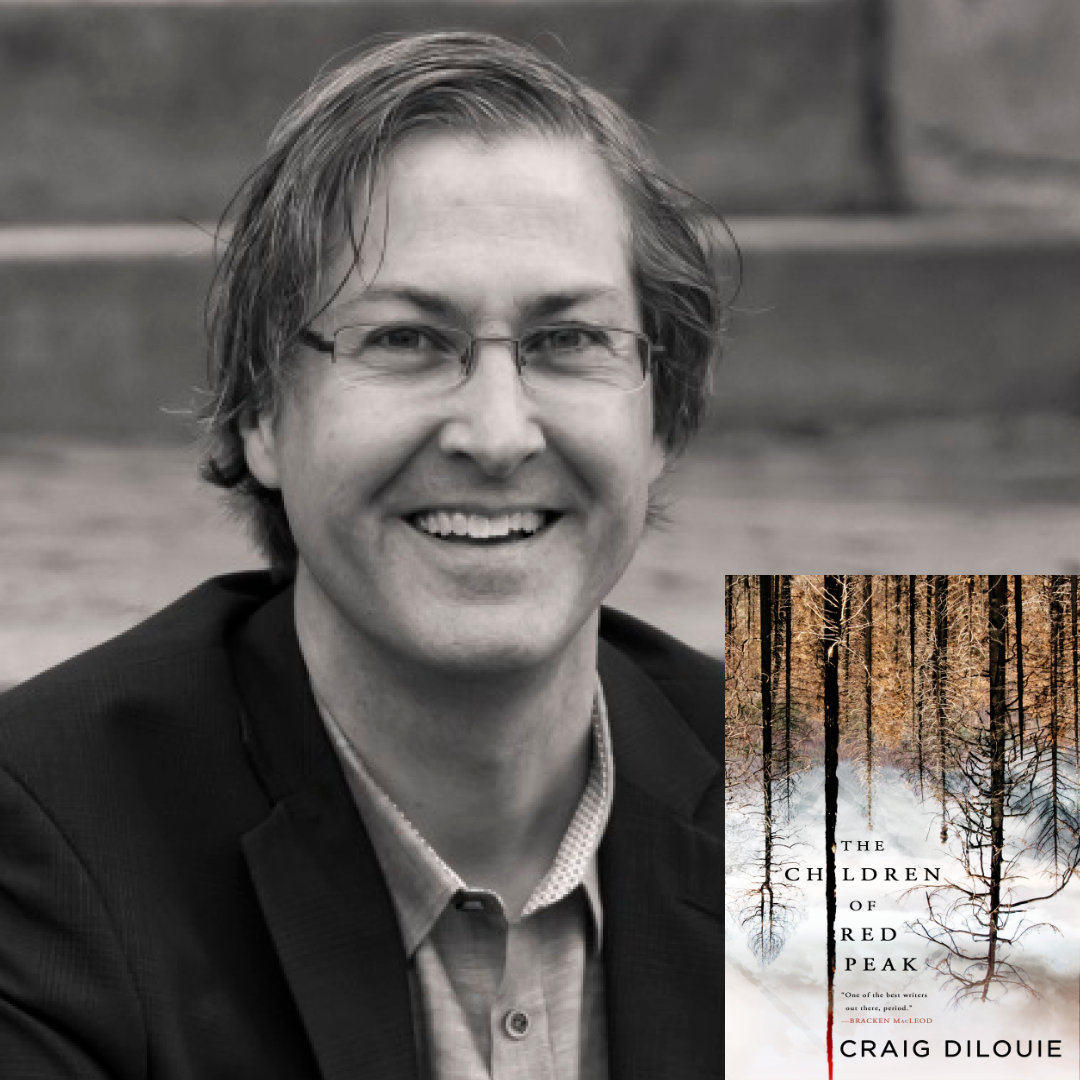 To finish 2020, we welcome back Bram Stroker Award-nominated author Craig DiLouie to discuss his latest novel, The Children of Red Peak, which is a horror novel following the life of three kids who are reunited years later after surviving a cult.

Last year Craig DiLouie joined us to chat about his dystopian thriller, Our War, and his dark fantasy, One of Us. Let’s welcome Craig back to the blog and learn about this creepy new story!

Welcome Back Craig Dilouie. For those who don’t know, mind giving a brief introduction of you and your writing?

It’s great to be a guest at your blog again, Konn! I’m an American-Canadian author of speculative fiction living in Calgary, Alberta. I’ve written more than 20 published novels in multiple genres. I’m probably best noted for my horror fiction, published by big publishers like Hachette and Simon & Schuster, and my WW2 fiction, which I self-publish. The road my writing career has traveled was long and hard but also filled with joy, a journey that has been both gratifying and humbling. I’m a very lucky man.

Congratulations on the launch of The Children of Red Peak. Tell us about the new novel.

Thank you! The Children of Red Peak is a psychological thriller with elements of cosmic horror, which thematically tackles topics like faith, family, memory, and trauma. One might snapshot it as a novel that plumbs psychological and cosmic horror in the human search for meaning. Author Peter Clines called it Heaven’s Gate by way of Stephen King’s IT, which I think is fairly apt.

This dark novel tells the story of a group of people who grew up in an isolated religious community—one that evolved into a dangerous cult—and survived its horrific last days. Years later, when one of the survivors commits suicide, the others come together to confront the past and the entity that appeared on the final night, which may or may not be God.

The story is told in two timelines, one in the past in which we see them as children growing up in the community and seeing it all go bad, and the other in the present where they are adults coping with the trauma of what they experienced. Gaining closure on this trauma and solving the mystery of how their parents died will bring them back to Red Peak and a startling discovery.

Well, they’re obviously fascinating, and they’re fertile ground for horror because you have this group of seemingly happy people who are in lockstep obedience to a leader and doctrine and willing to do anything for them. But taking another step back, what I really wanted to write about was the human search for meaning, and how belief is a survival trait that can produce faith and moral achievement but also delusion and great evil. I wanted to tell a story about these themes through the lens of a religious group that is insular but relatively content, and how it logically slides into horror after its leader comes back from a trip and basically says, “I talked to God, he’s waiting for us at a mountain, we’re going to Heaven, and we’ll be tested when we get there.” They’re of course going to go, and if the tests are horrifying, they can’t be bad if they are from God.

The core idea for the story came from a reading of Genesis, in which God commands Abraham to sacrifice his son Isaac as a burnt offering. God stays Abraham’s knife at the last second. Many people view this story as a wonderful testament about faith and obedience. Me, I wondered: What would the story sound like if it was told from Isaac’s point of view?

In the end, a cult was the perfect vehicle to capture these ideas and tell a story I hope readers will find emotional and captivating.

At the virtual book launch for The Children of Red Peak, you described wanting to dive into the minds of cultists and avoid the cliches. How did you approach this perspective and the research?

I absolutely wanted to avoid the cliches, as I think they’re overdone and don’t do justice to the rich, available themes.

I wanted to show the horror isn’t just in what happens in say the horrible tests at Red Peak, it’s even more so in how eagerly these otherwise good people undertake these tests based on the logic of their belief system.

I also wanted to avoid critiquing any specific religious beliefs. The group in the novel is a very evangelical, very strict apocalyptic Christian group, and their beliefs are presented with courtesy and taken at their word by the characters, who in the childhood held these beliefs. For me, the specific beliefs didn’t matter. Instead, I wanted to examine belief itself.

I also wanted to show how there are many what you might call “off brand” religious groups, but they are not cults. What makes a cult a cult is in the level of harm they do to their members and communities. I was really fascinated in how that level of harm might be justified. Also why people join groups like this, why they don’t leave if the group is in fact harming them, and how they cope if they do escape. The horror that happens in the heart and mind can be so much more powerful than other types of horror.

Did you use any reference material for the creation of the religious group, or is it purely fiction?

I did a lot of research about specific cults to learn about their manipulation techniques and what led them to self-destruct. Most of my research, however, dealt with the psychology of belief, trauma, and the appeal of being able to share a strong belief with a group.

The cover is subtle and disturbing with the hint of red and choice of photography. Does the upside-down forest have relevance to the story?

Lisa Marie Pompilio did the cover. She’d produced the trade paperback cover for my novel One of Us and the hardcover and paperback covers for Our War, both published by Orbit, an imprint of Hachette Book Group. When I found out I’d be working with her again, I was ecstatic, as she’s fantastic.

The cover she produced for The Children of Red Peak is perfectly creepy and enticing. The forest represents wilderness, the upside-down world conveys everything is out of kilter and broken, and the blood trail suggests a grisly event. Overall, it evokes mystery and invites readers to explore that mystery. I think she nailed it.

Well, since it’s 2020, I’m going to say I’m going to go on surviving! Writing wise, I’m working up some new concepts to pitch to Hachette while producing another WW2 series for publication next year. I also started a shorter military fiction series set in the near future, which is in talks with several audio publishers. So 2020 put a stumble in my step, but overall I’m not letting it get me down. I’ll soldier on and keep writing as long as people keep reading.

Let’s thank Craig DiLouie for joining us to talk about his new novel, The Children of Red Peak!