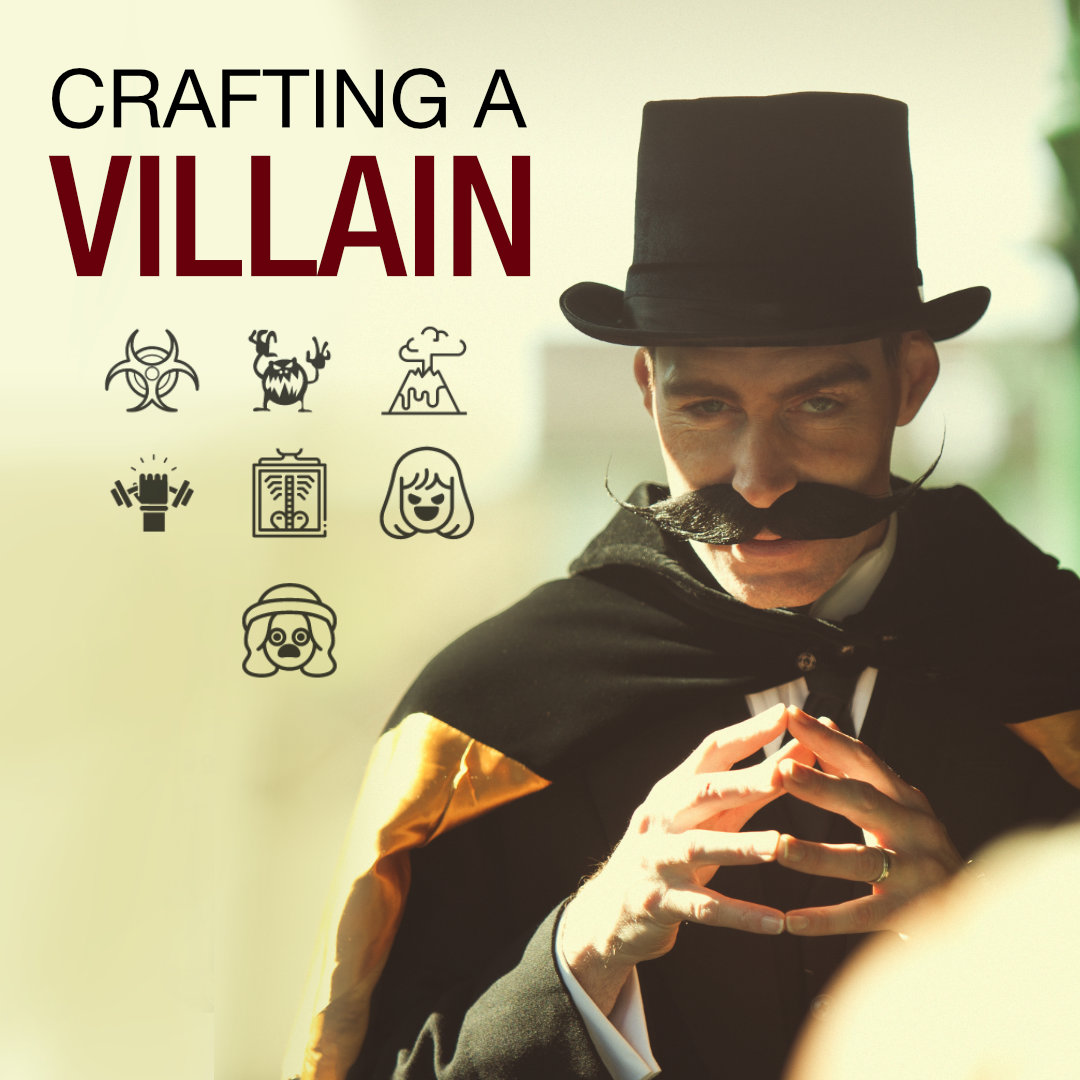 Crafting a villain is an exciting part of writing a book. Like creating all characters, you develop a relationship with these fictional beings.  Crafting a villain is a tricky one because you want them to impact the reader negatively. Now, if you take it too far, the villain becomes alienated, and they become fake. The villain will be unrelatable. At that point, you’ve got yourself a real corny antagonist. In this blog post, we will look at some inspiration and concepts to think about when creating a convincing villain.

A villain can come in many forms, like another human being. They can be a monster, a group of people, a kingdom, the environment, or even the protagonist themselves. There’s a lot to consider. Ultimately it depends on the premise of your story. Sometimes you aren’t sure who the villain is. You learn who they are while writing the draft. Here they can grow and evolve. The villain – or antagonist – is the opposite of your protagonist and ultimately should serve as an obstacle for your story’s hero.

Know Your Premise – the Skeleton for Crafting a Villain.

If you’re not sure what you’re writing, it’s challenging to think of who – or what – the villain is going to be. There are many forms they can take, so it’s essential to go back to your premise and think about what you’re writing first. Then the villain will reveal themselves. Are there more than one? Or are you focusing on a single antagonist?

Sometimes you come up with a character that is an exciting concept, and you’re unsure where they fit in. The character can live in your head for a while, or you jot it down in your notes, and somewhere down the line, that character will find a home. Other times, because of that villain, the premise is born. If you happen to have an antagonist in mind before your story, let the antagonist help shape the story alongside the protagonist.

Now, on the flip side, let’s think about what your protagonist is attempting to achieve. Are they chasing the love of their life? Or are they trying to obtain a secret treasure or save the world? Or perhaps they are dealing with a change in their life – like a divorce. There’s are plenty of obstacles for your protagonist to overcome.

Here’s the fun part of crafting a villain – make your readers love them. A good villain should be likeable, and in some cases, even relatable. Juggling the relatable and hate ideas is trickier than stating it. Let’s look at some different types of villains and ask ourselves questions about making the reader adore them.

Crafting a Villain – The Types of Evil

Creating a likable monster has a far more significant impact on your reader rather than some cliché creature that we’ve all seen before. Monsters tend to have a lot of physical traits about them. Sometimes they have abilities as well that make them a threat. Design the monster. Then, decide how much you are willing to share with the reader. A good monster villain doesn’t always have to shine in the light. You can use the reader’s imagination to fill in the blanks. Let them attempt to unravel what this creature is. Mystery can go a long way when you’re creating a monster.

If your villain is more sophisticated than that, we toss in the human element. No one believes that they are evil. People do horrible things and justify their actions for them. There are countless examples in the real world.

Ask yourself: what kind of life would it take to make someone grow into the shoes of your villain? You might even have to go back to their childhood. Do a character study to understand who they. The study doesn’t have to be in the story, but you must know who your villain is to believable dialogue and actions.

Using the elements as a villain gives you some leeway in developing anything sophisticated. You can get quite creative with the environment by making your protagonist struggle. Effort can keep your reader hurrying to the next page. Think of doomsday scenarios or stranded-on-an-island type environments. Environments are how the protagonist attempts to overcome the odds of the harsh nature.

We lightly touched on this before. What if your protagonist is the villain? As we talked about before, we want to bring in the human element, but we give further details to the reader. We follow the protagonist’s journey and see first-hand how the character develops into something horrific. The hero-gone-bad is often known as the anti-hero.

Another interesting villain concept is a friend. Perhaps the reader has no idea who the villain is. Eventually, a supporting character turns on the hero. Woah! The evil friend acts similarly to the anti-hero concept, except there is heavy tension between these two characters.

Another exciting type of villain is a group of people, a kingdom, a country, a rival sports team, a religion – literally anything that is an organized entity. Here you can design the group’s motives. Think about the hierarchy of the entity. Is there a single leader? Is it a council? What are their end goals, and how much power do they already have?

Make it a Combo-Fun-Pack Villain

The examples above constrain villains into neat and pretty little categories. Stories don’t have to be like that. Why not include a group where the hero eventually joins them and becomes the villain? Or a creature feature where they are quite intelligent (Frankenstein?) There are endless possibilities when creating a story. It’s why writing is so much fun – we get to push the limits and explore entirely new concepts. Mishmash the villain into something exciting. The villain can be technology, or an alien, an ancient underground group of mole people. Ultimately you want the villain to be believable, so your reader enjoys the story and doesn’t put the book down.

Too Many Combos! Their Power is Unstoppable!

Now, we can’t just ponder how fantastic the villain is or how in-depth they are. You don’t want your antagonist to overpower the protagonist in the story and have readers forget about the main character. You want the protagonist to be the focal point. What are your villain’s weaknesses?

Based on some of the categories above, or a combination of them, what are the opposites of their strengths? A villain’s weakness gives your protagonist hope. It is then up to you to decide when the reader and the protagonist discover this if they ever learn how to overcome this villain.

Go on a Date with your Villain

Crafting a villain is as much work as creating an interesting protagonist. If you don’t care about the villain, neither will your readers. Take the time to get to know your villain. It’s like starting any new relationship. You have to break the ice, get to know them, and eventually know the inner workings. Then you can finish their sentences – because you’re the writer.

Summary on Crafting a Villain

Hopefully, these ideas spark your creativity and push you in the right direction. Find more writing ideas on the blog under Writing.

If you have something to share, feel free to drop it in the comments. The more we help each other write a story, the better books there will be all around.