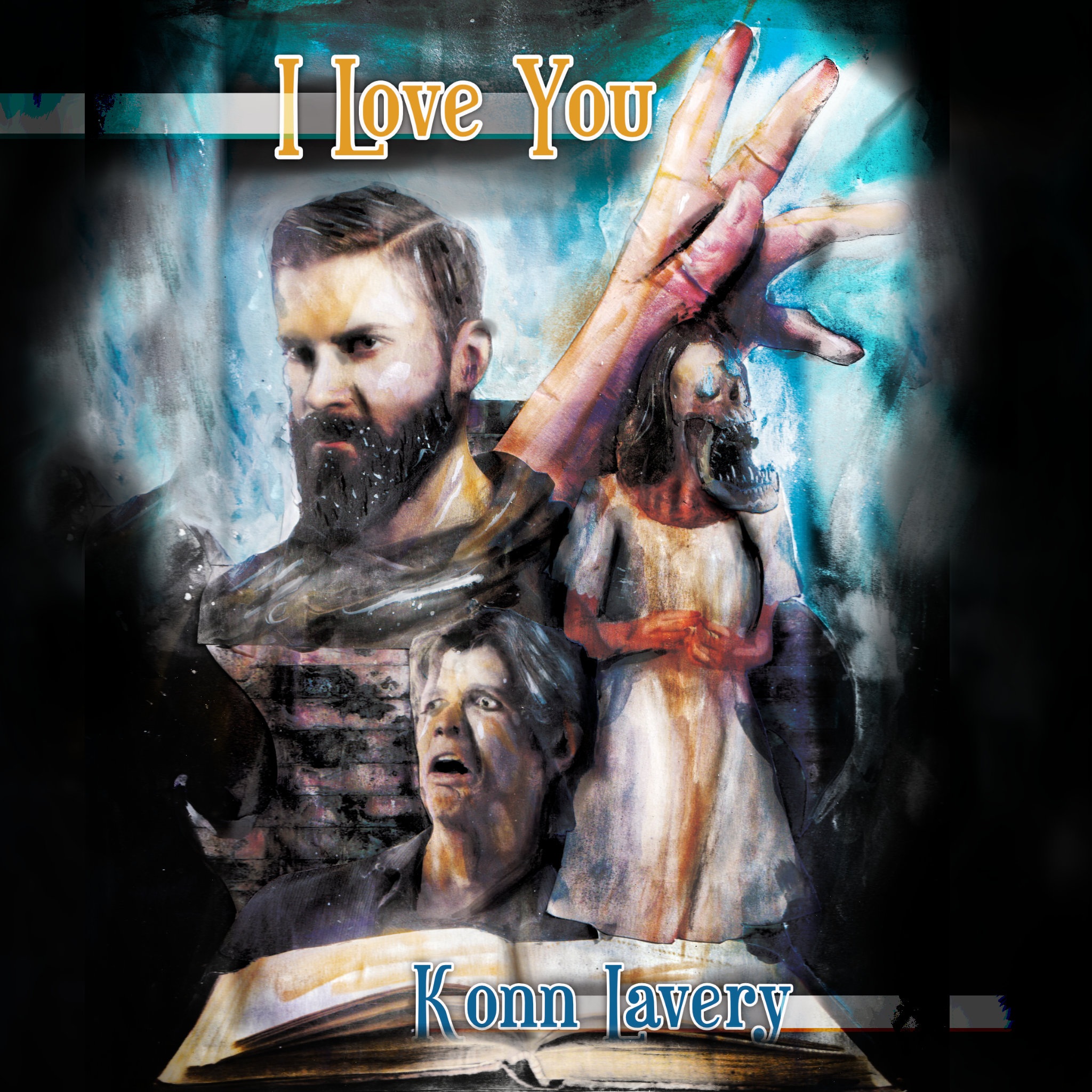 In a remote town, a terrible curse has plagued the good people. Their home is haunted by a ghost – or something otherworldly – that is killing them off one by one. The government has locked them in with no form of communication, and only one man knows the truth behind the horrors.

I Love You is November’s short story taking you into a paranormal horror where survival is looking slim. Enjoy the story in written form, the artwork, and in audio through the podcast with improv synths.

Listen: I Love You

Read: I Love You

“I love you” is supposed to be a phrase you use for those you hold dear to you. Never did anyone think that those three words would become the kiss of death. The funny thing is a lot of people also do not believe in the supernatural. Such naïve simpleton. Some of us do know the truth, like me. I am also relatively efficient in practicing the art. My former wife didn’t believe, for she couldn’t see any proof, like the others. Wouldn’t she be surprised now? Not everything real can be seen with our naked eyes. Our vision can deceive us so easily, especially when we focus on that single human sense. We have so many more! Smell, touch, hearing, and taste are equally important, letting us tune into our world. Then, let’s not forget about the lesser-known sixth sense – extrasensory perception.

Even then, people question how effective it can be. Human beings are limited – true. This is why we must rely on trinkets, rituals, and tuning into the otherworldly to harness powers that we can even fathom. It takes an awful lot of willpower to manifest and control something from the other side. I know this first-hand as I tried to combat The Lover. Others have too. Hell, some of the world’s most capable magic users have attempted to take control of the situation.

I could have learned so much from them if they weren’t now dead. Just like anyone else that has encountered The Lover, she takes them. Everyone in the town can hear the haunting shrills of “I LOVE YOU” before she frees her victim from this world. I’m not sure what she does to them. Maybe she’s trying to harvest souls to fill a void. Or perhaps she merely is eradicating them from the flesh, making them like her. If so, where are the others? We don’t have a solid understanding of what she is – I mean, I have a better idea than most. No one believes a warlock. Her presence has frightened the government, and they have thrown us into a lockdown state where no one can enter or leave our town. We are on our own.

Thankfully, most of us are farmers and can make food to last as long as we need it. Every once in a while, our supply truck drives into town with needed supplies. We have some people who are at the border of the lockdown to negotiate with the military. We don’t have any other choice. A riot would only end with the army shooting us. We aren’t even able to post videos online because they’ve locked out all Internet and cellular connections to our town. They don’t want this going out to the rest of the world. Our best bet for survival is cooperating with the government and avoiding The Lover until they figure out what to do with us.

A portion of me wants to try and reason with her. Of all people in our town, I am the most capable. Then, I hear the shrilling, “I LOVE YOU,” as she takes a new victim, and the fear sinks in. I cringe, knowing that she has outdone the other great mystics. Then I think about what I know. No . . . I can’t. Fear can keep you alive.

I’ve seen her a few times. It’s hard to describe what she looks like. The Lover appears as a sad woman in a nightgown. Her face is deformed. No one would ever know who she is. That poor soul stuck between this world and the next, which is the only way to describe her. She is proof of undead, wandering up and down our crooked, potholed, streets.

The latest sighting I had of The Lover was probably a couple of days ago, just before dusk. Truthfully, I’ve lost track of time, staying inside all the time in this bland house. My ill-fated wife’s blue eyes may have kept me a little too entranced to ever noticed. I remember watching from the window as the church bell rang. Oh, we use the bell to indicate when it is no longer safe to go outside or when someone spots The Lover. Her schedule is reasonably consistent, but on occasion, she has fabricated during the day. I derail, anyways, poor Ivan, our neighbour – my neighbour – was on his way home after picking up supplies. He was running. My neighbour didn’t have a car, and quite frankly, people aren’t willing to share the limited supplies, including vehicles.

Ivan was doing his damn best to be quiet while hurrying down the street. I guess she had already spotted him because I saw her come up from the hill. As she hovered to the top, all light in the sky turned dark, leaving us under blackness – darker than any night!

She was radiant, for she glows blue and white. Those haunting eyeless sockets are something I will never forget, radiating a dark blue flame of anger. The pointy teeth stretch across her elongated mouth, forming a scowl of pain and hate. I’m sure she uses them to feast on the souls once they have passed from this world. It’s my best guess.

My viewpoint was limited, peeking from the curtain. Just like everyone else in their homes, we watched poor Ivan run down the street. He was crying for help. What could we do? Physical objects go right through her, and no one else in this town practices demonology. I’ve dabbled in it, after The Lover, but alas it is not my specialty.

The shrilling words of “I LOVE YOU!” pierced from The Lover’s open mouth. It’s as if the voice projects from her throat, for her jaw does not move. The sound is too much to bear, and many of us cover our ears when she shouts. The Lover continued to scream over and over, “I LOVE YOU! I LOVE YOU!” like a broken record. Ivan wasn’t able to keep up his pace, and The Lover was closing in. I wanted to look away, but I had never seen her take a soul. My poor wife, who didn’t believe my powers, crying, “I love you!” before I cast that fateful spell on her, binding her to the demon.

Ivan tumbled onto the floor, dropping his groceries in the process. Knowing the people of this town, I figured they would scurry around like rats to grab the supplies once Ivan died. The Lover was only half a block away as the mysterious fog she brings with her surrounded the area. Her mouth closed, and she seemed innocent at this point. Just a sad lady who wants closure. Who can blame her? I felt sympathy for her only for a brief moment because, after that, the fog surrounded Ivan. The Lover’s jaws expanded like a snake – three times the size of her skull as her mouth plummeted towards Ivan. His hand extended upward through the fog, begging for mercy, as she dove down onto him. Ivan’s screams erupted as one more, “I LOVE YOU!” boomed throughout the town.

I couldn’t blink, watching the fog swirl around and around. I’d never seen anything like this before. One moment Ivan was there, begging for his life, and the next, he became the fog. I could hear his voice continue to scream for mercy. The voice . . . changed, as if he were underwater, bubbling, muffled, and then nothing. All the smoke pressed inwards to the single point where Ivan and The Lover once were. Then, it dissipated into nothing.

That was it for Ivan. The sky returned to a familiar orange hue as the sun prepared to rest. The disturbing light change happens every time The Lover takes a victim. Already, people were leaving their homes to salvage whatever supplies Ivan left behind, as I expected. Not I, for I remained at the window, watching, and wondering how many more souls The Lover would take before she was satisfied. Then, as always, an overwhelming wave of guilt rushes through me, knowing what I had done. The fear. The anger. I’m sorry.