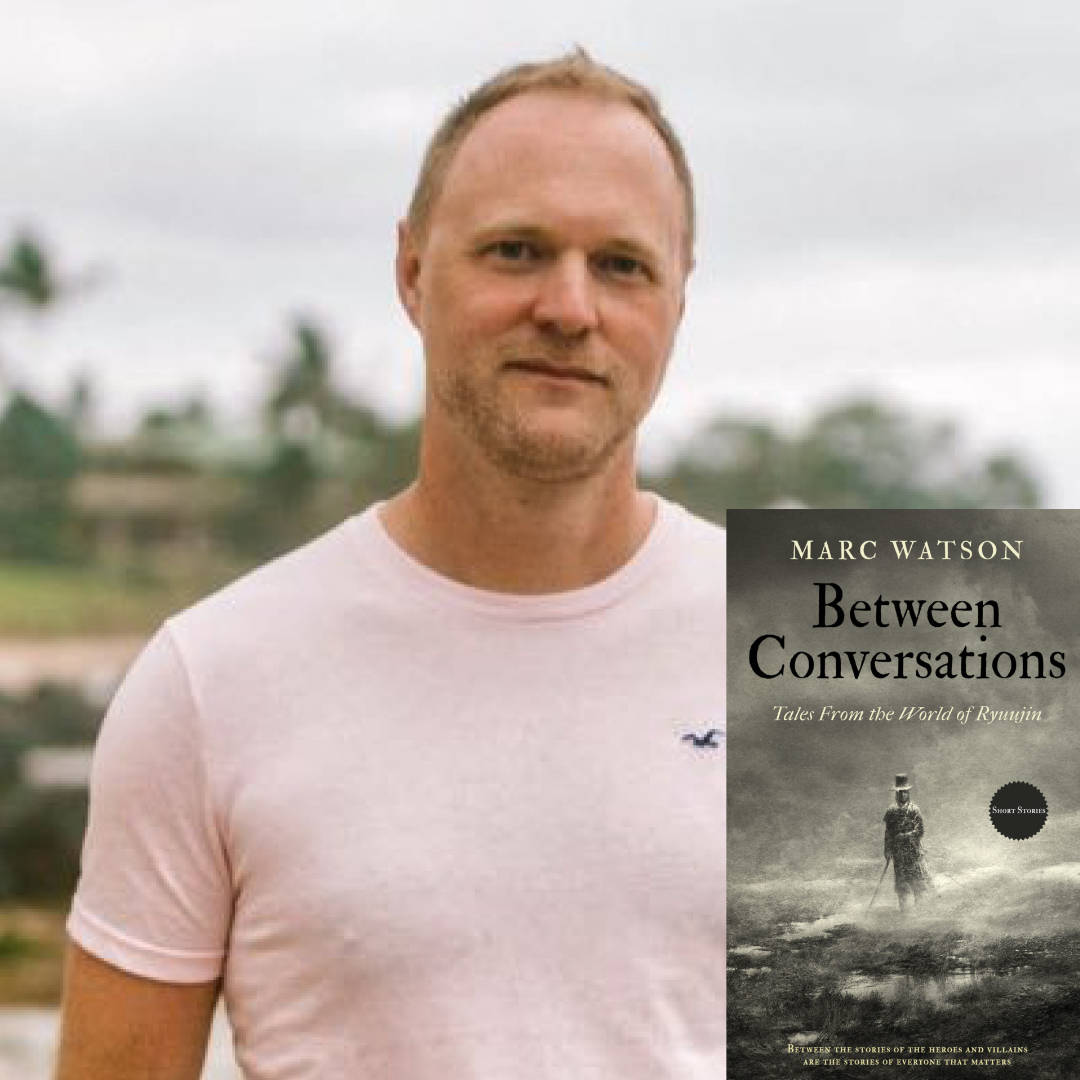 For October I am pleased to welcome back Marc Watson. He has been on the blog previously for his Catching Hell series, way back when we first met in 2016 before he was published, and in 2018 for the sequel novel. In between those two books, he had written the dark comedy novel Death Dresses Poorly (which I recommend checking out).

Now, his latest and greatest, Between Conversations Tales From the World of Ryuujin, continues in his Catching Hell universe with nine brand new short stories. Let’s welcome Marc Watson to the blog and learn more about his latest release.

Welcome back Marc Watson! For those not familiar with you, give us a short intro.

I would love to Konn, and thank you for having me back!

I am Marc Watson, a genre fiction author from Calgary, Alberta. I have been in the writing industry for four and a half years, and writing for my own enjoyment since I was a teenager. I’m a father of two young boys, devoted husband to a patient wife, I work a full-time job I love, and I consider myself a poutine connoisseur extraordinaire.

I have written three novels, the aforementioned Catching Hell duology and Death Dresses Poorly, as well as having been published in two short story anthologies, and have just recently released Between Conversations, which is my first self-published release.

You’ve got the new Between Conversations Tales From the World of Ryuujin anthology out, congratulations. How have your readers described it?

Thank you! The book is still fresh and feedback has been slim, however the main thought I get about it is how diverse the stories and characters are despite all being in the same universe. There’s adventure stories, tense drama, tongue-in-cheek bar scenes, a YA-style story, a full-blown horror/thriller novelette… it covers a lot of ground.

However, readers so far have told me that there’s something for everyone, and what else there is also enjoyable thanks to the voice I give it.

What made you want to write an anthology, intentional or is it just one of those that sprouts?

Rejection! The great motivator. I had written and submitted the short story Low Level Buzz for consideration in an anthology, for which it was rejected. However, I loved the setting and the characters in it, and wanted to share this little piece of the Ryuujin world (that’s my name for the universe these are set in). I also had the rough mental outline for Alive Again, the first story in the collection.

Eventually I realized I had enough material to make a decent anthology, and I had the core concept, of it all being in the same universe at different chronological points in time, so I thought putting it together would be a great exercise in learning how to self-publish.

Additional note, what made you want to base it in the Catching Hell universe?

To answer that you’ll need to understand that I’ve mentally been living in this world ever since I was 15 years old, writing poorly-crafted stories by pen and paper. Decades pass and stories build up and although I have a basic understanding of the overall story that Catching Hell is a part of, I knew that there were other aspects of this world I could write about and flesh out a bit more.

The Japanese call these Gaiden. Side stories. Spin-offs. Small bits that add to a greater whole. I liked that idea, and knew that even within the construct of this world, with its rules already established and tone settled on, I can give the reader a lot of different flavours.

If I understand correctly, your first two Catching Hell novels are being redistributed?

You are correct, sir. The path of Catching Hell was never an easy one.

The original duology was published by Double Dragon Publishing, who I enjoyed working with a great deal because they were flexible and understanding and were just what I needed. However, they were purchased by another company out of the UK. After some back and forth, this new distributor wanted to continue to publish them. I however wasn’t certain they were the right fit for me.

Which is where Fluky Fiction came in. They are the publisher of Death Dresses Poorly, as well as the editor for Catching Hell: Destination as well as Between Conversations. I threw a tweet out about what was happening and it started a back-and-forth between us. They admitted that epic science-fantasy wasn’t really their genre, however due to our working history and mutual respect, they agreed that they would re-release the duology, with a fresh edit and new coat of paint. I couldn’t refuse. I love working with them way too much. So now they’re set to come back next year, with the reissue of Catching Hell Part One: Journey arriving in Q1 of 2021.

I quite miss our yearly drink catch up at When Words Collide. Since we weren’t able to have a one-on-one beer together, tell everyone on the internet what else has consumed your time since the 2018 interview.

And I miss it as well, Konn! As the first person in this writing world who really took notice of me and reached out, I owe you a lot and I enjoy catching up face-to-face.

I have been busy with learning how this self-publishing thing works and educating myself. I wrote the lion’s share of this collection in November of 2019, and I spent a lot of time after that figuring out my next move with it, and then making sure the steps I took were educated ones. It is unique and interesting and incredibly freeing! I don’t know if I want to abandon my desire to be primarily traditionally published, but my respect for the DIYers out there such as yourself has grown considerably.

However, I’m still just looking after my life and all the non-writing aspects of it. Kids need to be coached and taken places, or entertained when nothing is going on (like, say, March to June of this year). Work still needs to be done, and the lawn doesn’t mow itself! I don’t double-down on writing very often. Now that this is released, I’ll likely move on to something else. Or not.

For aspiring writers and established authors, tell us about how you approach your writing and author career. It’s quite unique and it could relieve a lot of unneeded stress people put on themselves.

Gladly! As I’ve stated before, I am an anti-author. I don’t want to write full time or sell a million copies to retire early. I like my life outside of writing very much and I look forward to doing other things. I am a hobbyist author. A day tripper. It’s why I’m not pounding out two or three books a year. Not that there’s anything wrong with that, but it’s not how I personally want to spend my time.

By anti-author, I mean that I somewhat fly in the face of the traditional author stereotypes with this way of thinking. I write only when I want, and never for more or less than I feel is needed. I don’t set writing goals ever, and I don’t actively participate in events like NaNoWriMo (despite accidentally “winning” it…twice…). The measure of success we give ourselves can be just as damaging as it is rewarding. If you only write 10 words in a week for whatever reason, that’s fine. If you smash out 10,000 words in a day, more power to you. Just don’t let what you perceive to be required to be a “successful” author hold you back or push you forward in a dangerous way.

You can find Marc Watson through the following links below. Check out his new anthology as well. I snagged it and it is sitting next on the to-read list.

Find Between Conversations Tales From the World of Ryuujin from the links below:

In the world of Ryuujin, heroes rise and fall, but there are always stories that slip through the cracks. The tales of the people who shape the years to come. Heroism and betrayal. Conversations between friends and enemies that will change the course of the world. These are nine stories from a world that is historic, modern, and terrifyingly futuristic. A world where science and magic intertwine, and give birth to the unknown souls who become heroes, and the legends who fade away into history. From the author of the renowned dark comedy Death Dresses Poorly, and from the world of his hit science-fantasy duology Catching Hell comes a collection of adventure, drama, joy, and terror as we look into the lives of the powerful, the meek, and the people who make the world turn over the course of centuries.