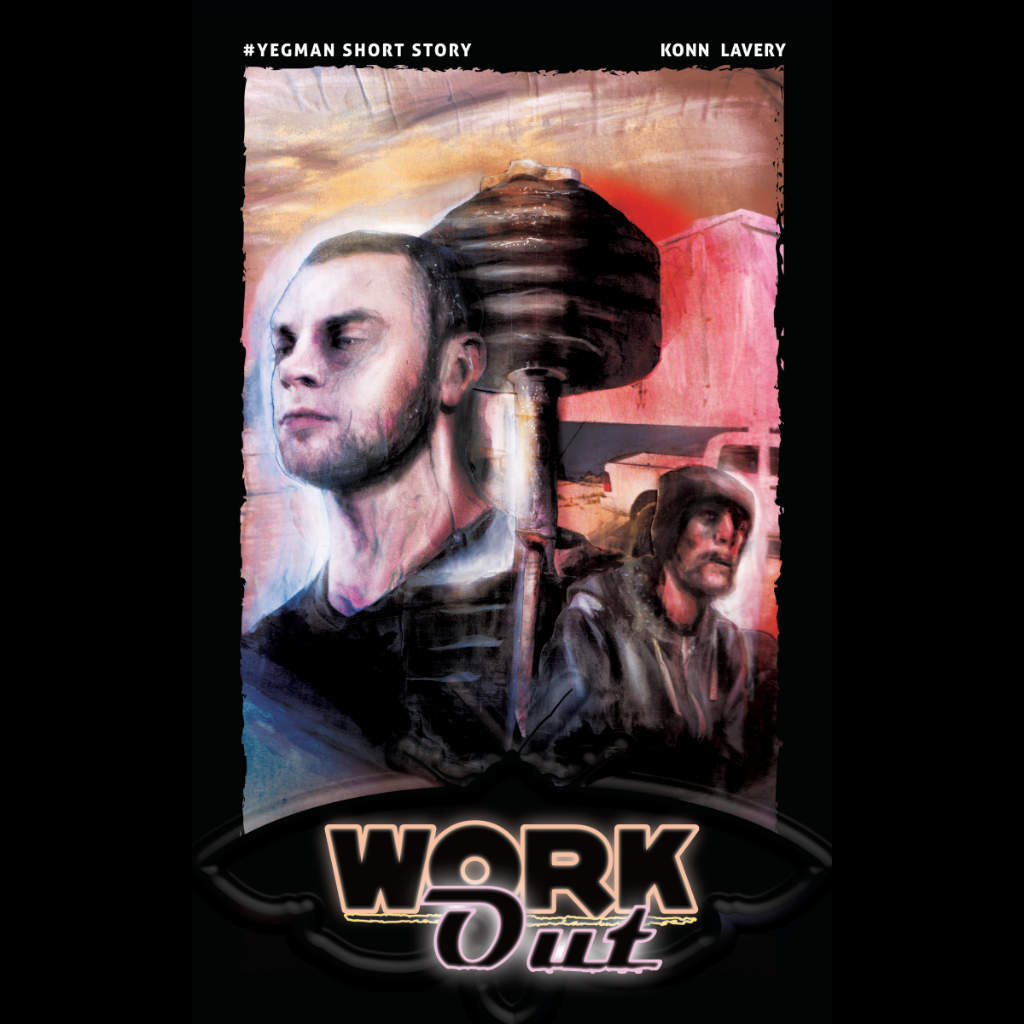 A man who hopes to put his past behind him is pulled back into the dark life by his old party buddies. They need his help after getting involved with Edmonton’s most notorious gang – The Crystal Moths. If he’s not careful, he’ll slip into his old life and can say goodbye to his future.

Work Out is September’s standalone short story that takes place after the #YEGman novel, bringing you into the grungy underbelly of Alberta’s capital. There is no justice down here.

Always exercise… every day, every… single… day. I never stop working out. If I didn’t, well, things would start to get ugly. I’ve spent too much time trying to pull my self out of the gutter, and there’s no way I am going back in that dirt. So I lift, cardio, and repeat. My old friends say the ridged routine has made me dull, or I can’t ever loosen up. Yeah, well, too bad, bro. This is the new me. Guess we’ll go our separate paths.

I take selfies, so what? The engagement I get online is crazy. Not to get like, egotistical (because my life coach says it’s a toxic path for the mind), but it’s a real motivation booster seeing those numbers go up from all the gals. Maybe I can be a life coach one day. My followers get what I am trying to do, not like my old pals. My friends, or ex-friends, I should say, and I were into some serious shit. Partying was a regular thing. Then the drugs came in, and eventually, we got roped into selling the goods. You need money to keep partying, and what’s a quick way to get cash? You sell the drugs. Man, we knew that right away after watching our own pockets burn before our very eyes. Long story short, I got out, they didn’t. It’s sad seeing them wither away.

About a year went by. I thought they wrote me out of their lives, but one found me. When an addict needs their goods, it turns out they’ll try to leech off of anyone. It was Tweaky-Travy, or Travis rather. I try not to use our old nicknames for each other. It’s degrading.

Anyways, Travis was standing outside of the cross fit gym just off 124th there. I get there pretty early, so I didn’t expect to see anyone other than the bros at the gym. Travis was unrecognizable, skinny, tattered clothing and all. He was rubbing his arms a lot with his hood up. If he didn’t call me by my nickname ‘Roadkill’ (long story on that), I would have walked right past him in the parking lot.

Roadkill. What a name. Anyways, the site of my old party bud was sad, but I stuck to my guns and asked him what he wanted. The man was pathetic. I still can’t believe I used to be like him. So, Travis started talking, saying he got mixed up with the Crystal Moths. I heard about them on the news, after a big scandal about a corrupt sergeant and the hashtag YEGman stuff. It was short-lived, minus the heat the police took. Social media is funny that way. Everyone loves sensationalizing something one moment, and then they forget about it the next.

I don’t. I remember the Crystal Moths from that horrific video that girl took. It looks like old Tweaky-Travy got himself involved with these guys. Sorry, Travis, said that he was needing my help with distributing some of the drugs he had. If he didn’t get rid of them this week, he would have to pay for them all now. And if that didn’t happen, well, you should look up the Crystal Moths and their return policy.

Man, my heart is too big. I wish my brain were bigger. As mad as I was, I chose to help Travis. We’ve been through hell and back together. He’s a moron, but I couldn’t just leave him to get gutted by these guys. The Crystal Moths don’t mess around. They’re not only in Edmonton, these guys are all over, which meant Travis was dead meat.

Look, it’s only been about a year since I’ve switched my life around. I still have some contacts from when I used to deal. The other guys never had these connections. This would be a quick job. It looks like Roadkill was back in the business. You should have seen Travis’s face when I told him I’d help him out. He gave me a bag full of this shit right there and then. I had to stuff it in my gym bag quickly, so no one saw it. We’d meet up in a couple of days. Tweaky-Travy, relieved, booked it after.

All-day, my brain kept thinking about what I was doing. My coach would be so pissed. I called up a few of my old contacts, and they hooked me up to their distributors. I managed to get rid of the goods down the chain of addicts and sellers. Boom, job done. There’s a thrill to holding a fat stack of cash after the end of a day. Tweaky-Travy sucked at this shit.

Travis and I met up a couple of days later. He seemed nervous, even though I told him the job was done. Hell, he looked like he saw a ghost, even after I gave him the cash. He was fidgety and wouldn’t say anything. He wouldn’t leave either. I finally asked the guy what was up. Travis said there’s more to sell.

I could have decked the prick right there and then. After a long day of working out, you get all pumped up on adrenaline. The urge was so strong. I gathered myself and saw the red flag – this was a slippery slope that I didn’t want to go down. Travis was using me as his enabler. It took every fibre of my being to tell my old pal that I couldn’t this time.

My heart skipped a beat. My stomach rotted. Travis’s face was grim, and his face whiter than paper. It was like I sentenced him to death. I kept telling him I couldn’t. He snagged my tank-top, begging me. The guy was down on his knees! I wanted to say yes so badly, but I couldn’t this time. I swatted him off, throwing him to the floor. He was as shocked as I. All I could do was run away and not look back. I heard him cry out to me, something about turning him into roadkill. I don’t know. I just kept running.

Travis didn’t come back. That week I was so focused on my workouts. I needed to keep myself distracted from thinking about what I had just done to my old pal. We had gone through thick-and-thin over the years. We had each other’s back until I went to rehab and got my life in order. I still can’t believe I left him. He showed up on the news not too long after. I was watching it on my TV, having my post-workout evening shake. They had Travis’s mugshot on the screen while the whole report focused on the Crystal Moths. Even the title was degrading: CRYSTAL MOTHS LEAVE SIGN TO CORRUPT POLICE ON DEAD MAN.

That’s all they saw Travis as, a dead man. This had nothing to do with the cops. It was a deal gone bad. Gotta love the news eh? The report switched to a graphic photo of Travis’s body at the crime scene. A moth was nailed into his forehead. It’s so demeaning. I felt sick and could barely finish downing my shake. He died because of me. What kind of friend was I? If I had only… no. I can’t talk that way.

My coach worked with me on my mindset to get out of that life, and I can’t run these thoughts through my head. That’s how my old pals and I stuck together. We manipulated each other. It’s toxic. Still, I can’t get it out of my mind. Tweaky-Travy, sorry, Travis, is gone because of me. The other guys started to reach out. Some of them are pissed. Others are trying to get me to deal again. There’s no way I can go down that road again. They’re persistent. They call me a murderer – which is one of the kinder insults.

The gym started to notice, and we got the cops to kick them out of the parking lot. They still let me know they’re around. Whether it’s a note on my car or a phone call, I ignore them as best as I can. Their little jabs are constant reminders of what happened to Travis. It’s my fault, and I need to live with that. So, I keep working out. The repetition clears my head: exercise, every… single… day.

An X-Cop Vigilante brings the law as a rebellious journalist traces his steps.