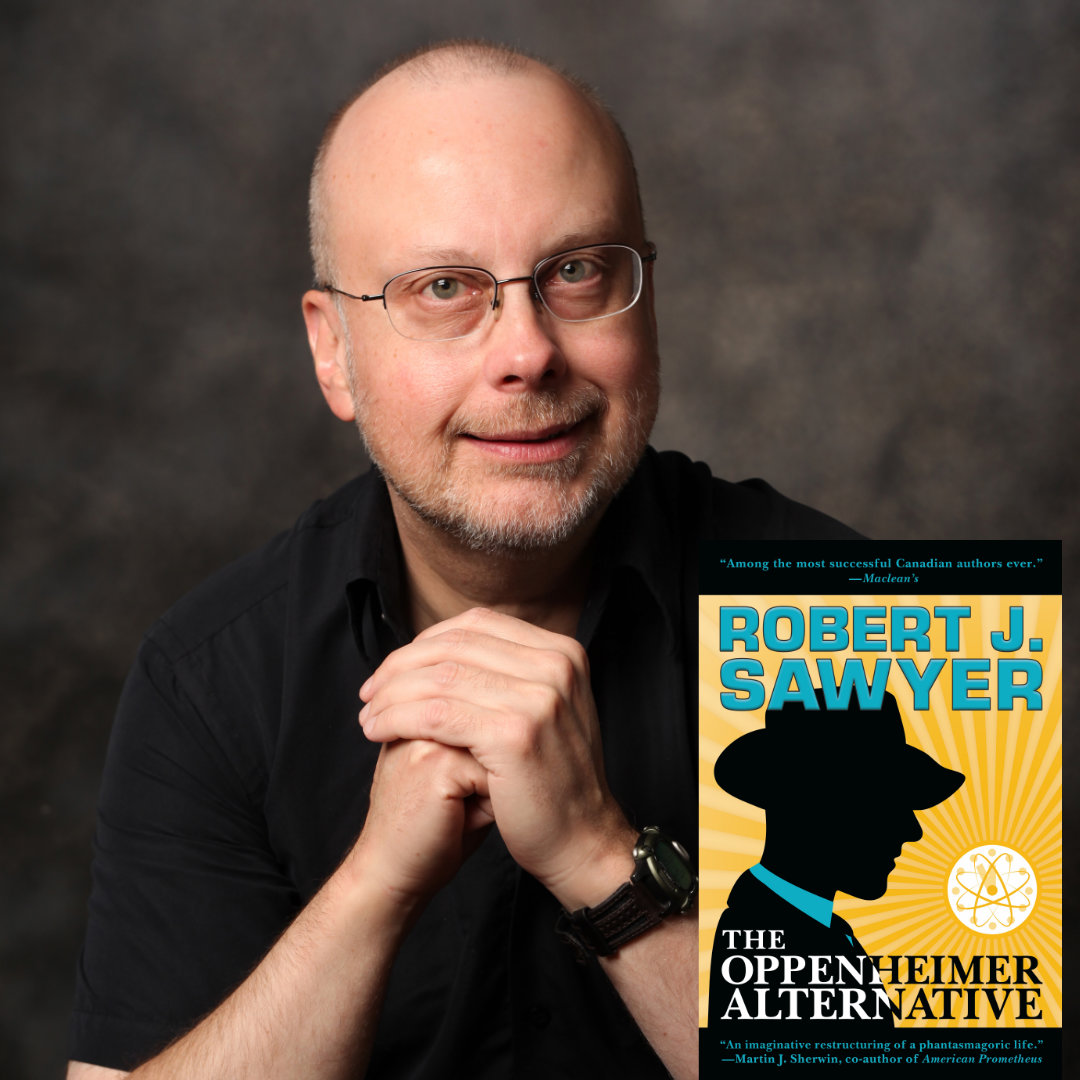 For June’s guest author, I am pleased to welcome back the Canadian science fiction author Robert J. Sawyer to discuss his latest novel, The Oppenheimer Alternative. Robert joined us in 2017 to discuss his writing career and his book Quantum Night. He is the only Canadian, and one of eight writers, to ever win all three of the world’s top Science Fiction awards for best novel of the year. Robert is also a member of the Order of Canada and has had his writing converted into television, as seen in the ABC TV series FlashForward.

Let’s welcome Robert J. Sawyer back to the blog and learn about his new novel, The Oppenheimer Alternative.

Welcome, Robert! Can you give us a summary of The Oppenheimer Alternative?

The Manhattan Project assembled the greatest physicists ever, under the scientific direction of J. Robert Oppenheimer. They came together with what they thought was a noble purpose: to defeat Adolf Hitler. But Hitler did what they could not, ending with a single bullet to his own head the war in Europe.

And yet they pressed on.  One of those physicists, Emilo Segrè, said, “Hitler was the personification of evil and the primary justification for the atomic-bomb work.  Now that the bomb could not be used against the Nazis, doubts arose. Those doubts, even if they do not appear in official reports, were discussed in many private conversations.” When those scientists finally succeeded in building the world’s first atomic bomb, Oppenheimer himself said, quoting Hindu scripture, “Now I am become Death, the destroyer of worlds.”

I wanted to give those tortured souls a chance at redemption. Instead of dispersing back into academia, as they really did after the war, I have them stay together to fight an external, natural threat to human existence.  If they succeed, they’ll be able to collectively declare, “Now we are become Life, the saviours of our world.”

The Oppenheimer Alternative takes place at a critical point in history: how did this reflect your research process while writing?

Our current year-numbering system is terrible. First, it’s culturally specific; second, it’s even wrong for that culture — Christ was born during Herod’s reign, and Herod bit the big one in 4 B.C.  So, if we ever decide to chuck it out and start numbering again, there are only two good initial dates: July 16, 1945, which was the birth of the atomic age with the Trinity test, and July 20, 1969, which is the first time humans ever set foot upon another world. No other milestone for which definite dates are known is as significant as those.

And, as it happens, this year is the 75th anniversary of the first of those events; it seemed like the time was ripe for a critical reassessment of what had really gone into it all.  Just as when we looked back on the 50th anniversary of Neil Armstrong’s “one small step” and could see the moonshot as more cold-war posturing than high-minded aspiration, so, too, we can now look at the Manhattan Project not as a saintly attempt to save the world from Nazism but rather as a calculated undertaking to establish the United States as the one-and-only post-War superpower.

How did the idea for The Oppenheimer Alternative come to you?

As always, there were numerous sparks. But one was a TV project I was developing back in 2015 with a Canadian production company about New York in the present day suddenly being cut off from the rest of the world. The team really wasn’t getting anywhere, so I did what I call a “kitchen-sink” pitch: an over-the-top outline, throwing every idea I could think of into the mix, just to jolt our thought processes.

I tossed Oppie into that because of a famous exchange he had in a closed-door senate hearing. When a senator asked him whether “three or four men couldn’t smuggle units of an atomic bomb into New York and blow up the whole city,” Oppie replied, “Of course it could be done, and people could destroy New York.”  The senator then asked, “What instrument would you use to detect an atomic bomb hidden somewhere in a city?,” and Oppie replied cheekily, “A screwdriver” —so you could open each and every suitcase.

The TV project never got anywhere, but the idea of doing something with Oppenheimer stuck with me: a sharp-tongued smartass who liked to tweak the noses of those in power.  The more I researched him, the more irresistible I found him as someone to write about.

What were some of the challenges while incorporating real historical figures into the story?

Every single character in the novel is not just real but famous, too: Oppenheimer, Albert Einstein, Richard Feynman, Edward Teller, Leo Szilard, I.I. Rabi, and so on. And so my first duty was to the truth: I had an obligation to represent these people accurately, capturing them as they really were, so that not only historians who have studied them but their surviving family members and friends would say I did them justice. Of course, that didn’t mean sanitizing them: precisely because they were real human beings, they had both human virtues and human flaws, none more so than Oppenheimer himself.

I made a point of showing the book before publication to people who actually knew or were experts on the real historical figures, including Martin J. Sherwin, coauthor of the Pulitzer Prize-winning Oppenheimer biography American Prometheus; my SF-writing colleague Gregory Benford, who was Edward Teller’s grad student; Doug Beason, the former Associate Laboratory Director of the Los Alamos National Lab where Oppie’s part of the Manhattan Project was based, and Jem Rolls, who wrote a fabulous one-man play about Leo Szilard called “The Inventor of All Things.”

Is this your first science fiction novel that merges within the alternate history genre?

It is, but I have a long-standing interest in the genre. Back in 1989, CBC Radio’s flagship documentary series Ideas bought two one-hour programs from me called “What If? An Exploration of Alternative Histories.” For those shows, I got to interview in person all the masters of the field, including those who now are its two superstars, Harry Turtledove and S.M. Stirling, plus Kim Stanley Robinson, Robert Silverberg, and Gregory Benford.

That said, my Hugo Award-winning Hominids and its two sequels, Humans and Hybrids, are alternate prehistory, in a way.  It’s such an endlessly fascinating genre: we’ve all asked ourselves, about both our personal lives and the state of the world, how things would be different, and maybe better, if some key event had happened or not happened.

My great friend Larry Niven says, first and foremost, a writer should “tell me a story.” That’s a fine approach, but it’s not mine. Me, I need to have something to say — some philosophical point I feel is worth articulating with the breadth and nuance that the 100,000 words of a novel afford.

I’ve been doing lots of research reading related to a variety of projects — one about what sorts of human personalities will best adapt to the rise of true artificial intelligence; another about the showmanship behind the early days of frontier paleontology; and a third about how our world will have been changed indelibly by the COVID-19 disaster. But I haven’t yet found what I’m looking for — something worth saying; something worth me taking years to articulate and my audience taking days to read.  When I do, I’ll settle on which of those project will be next.

Unrelated to writing, you’ve talked about offering public speaking as a futurist for corporate and government agencies. Is this something you still do? And what are the common themes you cover as a futurist expert?

Oh, yes.  I do it a lot, and I love doing it.  The two things I find over and over again are, first, that people don’t realize just how advanced our technology already is — although perhaps the COVID-19 crisis is changing that a bit as people suddenly discover that technologies such as video conferencing, which have actually been around a long time, are mature and robust.

And the second is that people keep fearing that technology will diminish their roles instead of expanding them. One of my favourite keynotes was to a provincial nursing association: nurses were very upset about things that machines were doing that used to be their jobs, but, in fact, taking away repetitive work frees them for an expanded role — including now, in many jurisdictions, prescribing drugs — that was denied to them in the past.

Do you think that the technological singularity is within the next decade?

No.  You mentioned my keynote speaking a moment ago.  Eighteen years ago, Ray Kurzweil and I gave joint keynotes at the Twelfth Annual Canadian Conference on Intelligent Systems.  He said the singularity was near then, and, well — here we are and it hasn’t happened.  The singularity — the moment when machines exceed our abilities and render us entirely obsolete and redundant — depends not just on artificial intelligence but on artificial consciousness, and it doesn’t seem like we’re anywhere near having that happen.  But if and when it does occur, I hope it’s as beneficent as the emergence of Webmind, which I portray in my WWW trilogy of Wake, Watch, and Wonder.

For aspiring writers, what’s a single piece of advice that you’d offer to them?

Oh my God, dudes — this is your moment!  Don’t waste it. COVID-19 is a disaster of gigantic proportions, and I don’t downplay that for an instant, but you will never have this much time off work, this much time off school, this many nights and weekends where you must stay home as you’re having right now.

If you’re someone who wants to be writer and you aren’t writing your heart out right now, well, sorry, you will never make it. Ninety percent of those who want to write say they’d be doing it if they only have the time (the other ten percent — people like me who have already made it — did it even when we didn’t have the time).  You’ve got the time now: either write or face up to the fact that you were just making excuses for why you weren’t writing all along and admit that you never were really serious about it in the first place.

You can find Robert and his work, including his new novel The Oppenheimer Alternative, from his website and the links below: