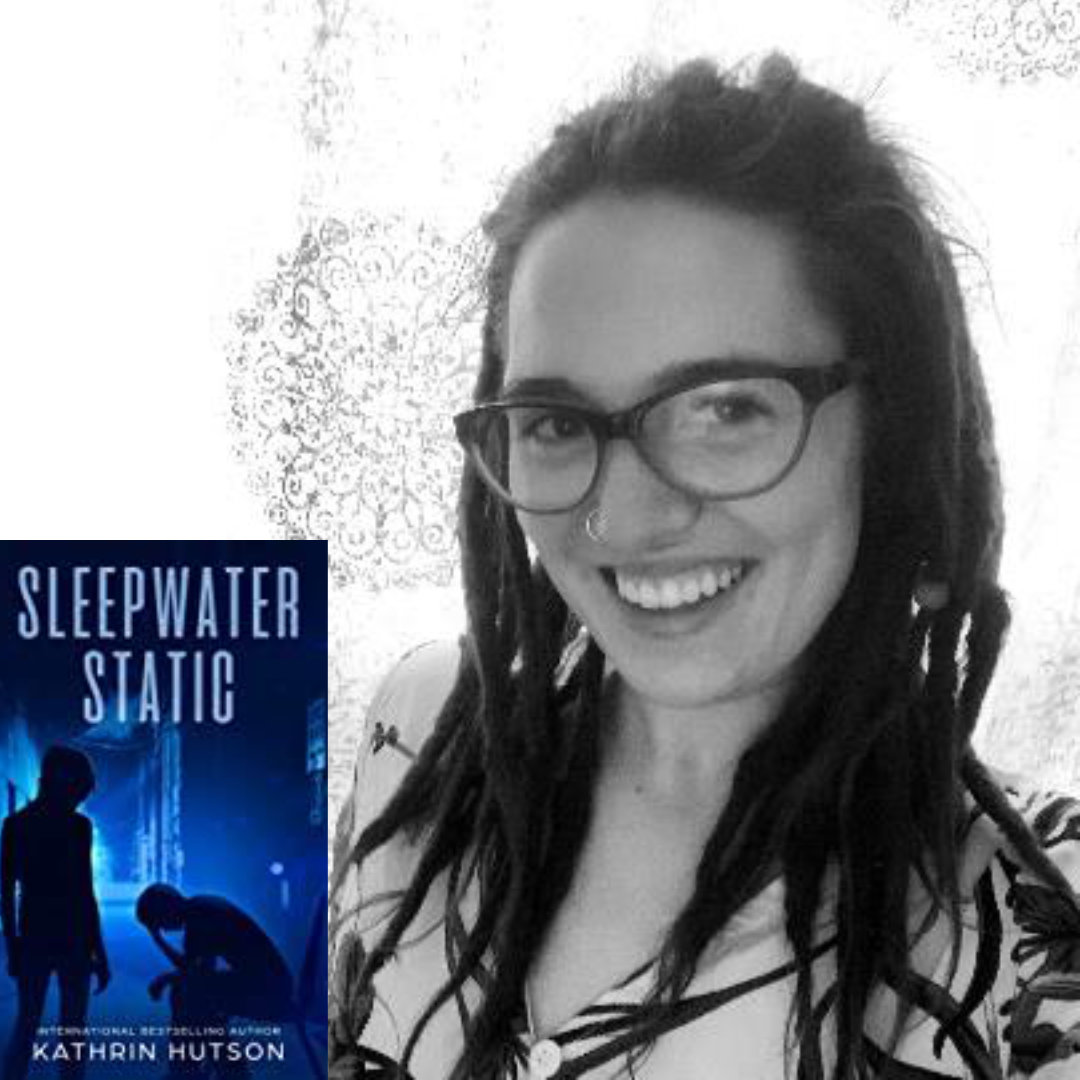 Last July we had international bestselling author Kathrin Hutson join us to discuss her LGBTQ Dystopian sci-fi series, Blue Helix with book 1, Sleepwater Beat. Now, she returns with the next novel, Sleepwater Static, coming out May 26th, 2020. Let’s welcome Kathrin Hutson to the blog!

Thanks for joining us again Kathrin Hutson. We’re excited to learn about the follow up novel, Sleepwater Static. Can you give us an introduction to what the second novel is about? No spoilers!

Of course! (Nobody likes spoilers…) In a nutshell, Sleepwater Static is definitely the continuation of the storyline as it pertains to the organization called Sleepwater and the people like Leo in Book 1 with the ability to “spin a beat”. Only Book 2 focuses on a different main character, Bernadette Manney, who was a supporting character in Book 1. This was always the plan—to write each book in the Blue Helix series using a supporting character from previous books as the main character in the next. There’s so much to explore within this Dystopian world, and I wanted to tap into different personalities and experiences within the overarching story, because they feel important to highlight.

So we get to see Bernadette—a seventy-one-year-old white woman from the South with a complicated past—up close and personal. After Leo and this Sleepwater chapter parted ways at the end of Sleepwater Beat, we now get to follow what happens to the small group of people as they flee across the country and go into hiding. Bernadette takes them to Hollywood, South Carolina to lay low so a woman in their group can have her baby in secret, and Bernadette’s past finally catches up to her while she’s struggling to ensure a safer future for the people she’s come to love as her chosen family.

Previously you mentioned you put a lot of yourself into the protagonist Leo Tieffler for Sleepwater Beat. She sounds like a complicated character. Does Leo continue to reflect you as she develops in Sleepwater Static?

This is an excellent question, and while Leo definitely makes a very important appearance in Sleepwater Static, this story isn’t exactly hers. However (and much to my surprise), writing Bernadette reflected quite a bit more of my own experiences as well than I originally expected. I did set out with the intention of writing Book 2—beyond being another fantastic story—to specifically highlight more marginalized communities of people I never touched on in Book 1. Sleepwater Static explores discrimination on the level of race, racism, interracial relationships and transracial families, mental illness, mental and emotional abuse, and the struggles of raising a child in a world that just keeps “getting worse”.

How does this apply to me? I belong to several marginalized communities myself, and while I haven’t been discriminated against because of race, I spent many years living in South Carolina with my husband (that’s where he’s from) and have experienced and/or witnessed this discrimination as a friend, family member, and POC ally. I also what it’s like to feel so much shame that I end up running away from it instead of facing it head on and what it’s like to be a mother and struggle with personal identity throughout parenthood (both of which are things Bernadette and I have in common). Bernadette most definitely holds parts of myself and my past, and she also serves as a look into the future I see is possible but that I really do hope never comes to pass.

There are 3 books planned in the Blue Helix series (Sleepwater Static being the second), is this still the case?

I will say there are at least three books planned. I’ve already chosen the next main character for Book 3, and I have a feeling readers who love the Blue Helix series are really going to get excited when they hear who that is (again, no spoilers even for the series plans!). Of course, it’s impossible to know whether the story is truly finished with a third book until I actually get to the end of it. There may be more, there may not be. Not really knowing is definitely part of the excitement for me as well.

You’ve discussed ‘writing by the seat of my pants’ and some of your world building before.
How do you keep track of the world building?

Luckily, for the most part, this world is about 85% true to our real world. The present timeline (because both books do dive into the past, as will Book 3) is set in 2031, just far enough into the future to make this undoubtedly Dystopian and still eerily close to home with what we’re currently experiencing in modern society. So the only real world-building I’ve had to keep track of is this organization of Sleepwater and the historical elements I’ve added of people with this “beat” ability. In Sleepwater Beat, I used chapter interludes of news clips and radio shows to build the world. In Sleepwater Static, I use letters written from Bernadette’s childhood pen pal, who eventually becomes a very close friend (and then some) and follows Bernadette from the past timeline into the present.

This is also “by the seat of my pants”. But I can say that while I’m writing these books, I’ve somehow developed an ability to remember what I’ve previously written and keep the working parts of the dystopian world in line with where the story’s headed as I’m writing. I might chalk this up to having spent so many years editing fiction manuscripts for other authors. Or maybe it’s just the way my mind works. But I never really had to build maps or lay out blueprints for the world t keep myself on track. As far as I’ve heard from advanced readers and my editor, there aren’t any discrepancies 😉

You love researched, have you learned anything exciting while working on Sleepwater Static?

Actually, research is my least favorite part of the writing process, no matter the book or the genre in which I’m writing. But I know how incredibly important it is, especially when I’m writing a world that is such a parallel to real life.

The most research I did for Sleepwater Static was actually centered around Black History and the Civil Rights Movement in the United States between 1970 and 2010 (so yes, there was a lot). I enjoyed this for the fact that I was able to insert that extra layer of historical accuracy on a broad scale to tie the people with this “beat” ability into a woven thread of a group standing up for social justice and fighting to make the world a better place for “their people”. That was the larger underlying intention of this book—to highlight these struggles through the lens of a fictional marginalized group facing discrimination, hate- and fear-based injustice, and a feel of “always looking over their shoulder” based solely on the fact that they are different and have had no choice or control in the type of differences that set them apart from the rest of the world.

If you had to sum up the Blue Helix series in one sentence – quick elevator pitch – what would it be?

When the spoken word becomes a literal and physical weapon, no one is safe—least of all those who hold that power in their own voices.

Do you have any advice for new writers wanting to get their first, or next, novel out there?

It’s a bit of an overdone cliché, and yet it’s so true: Keep Writing. Over and over and over, every day, as much as you can, whether you think it’s total crap or the best thing you’ve ever put to paper. The more you write, the more you hone and polish your craft. And eventually, if you’re lucky, you’ll stumble upon something that does exactly what you wanted it to do.

On top of that, it’s so important to have your manuscript edited by a professional and read by several other people who understand what makes a good book before trying to put a book out there (through traditional querying or as an Indie book). Editors, beta readers, sensitivity readers, and advanced readers are all so important. Use them. You want to put your best work out there, and while the writing part is all on you, so is the responsibility to ensure that you’re putting something out there that is good, finely tuned, polished, and that doesn’t fall into any category of perpetuating harmful stereotypes or tropes.

Let’s thank Kathrin Hutson for joining us on the blog!

You can find her new novel on her website, amazon, and the various links below: