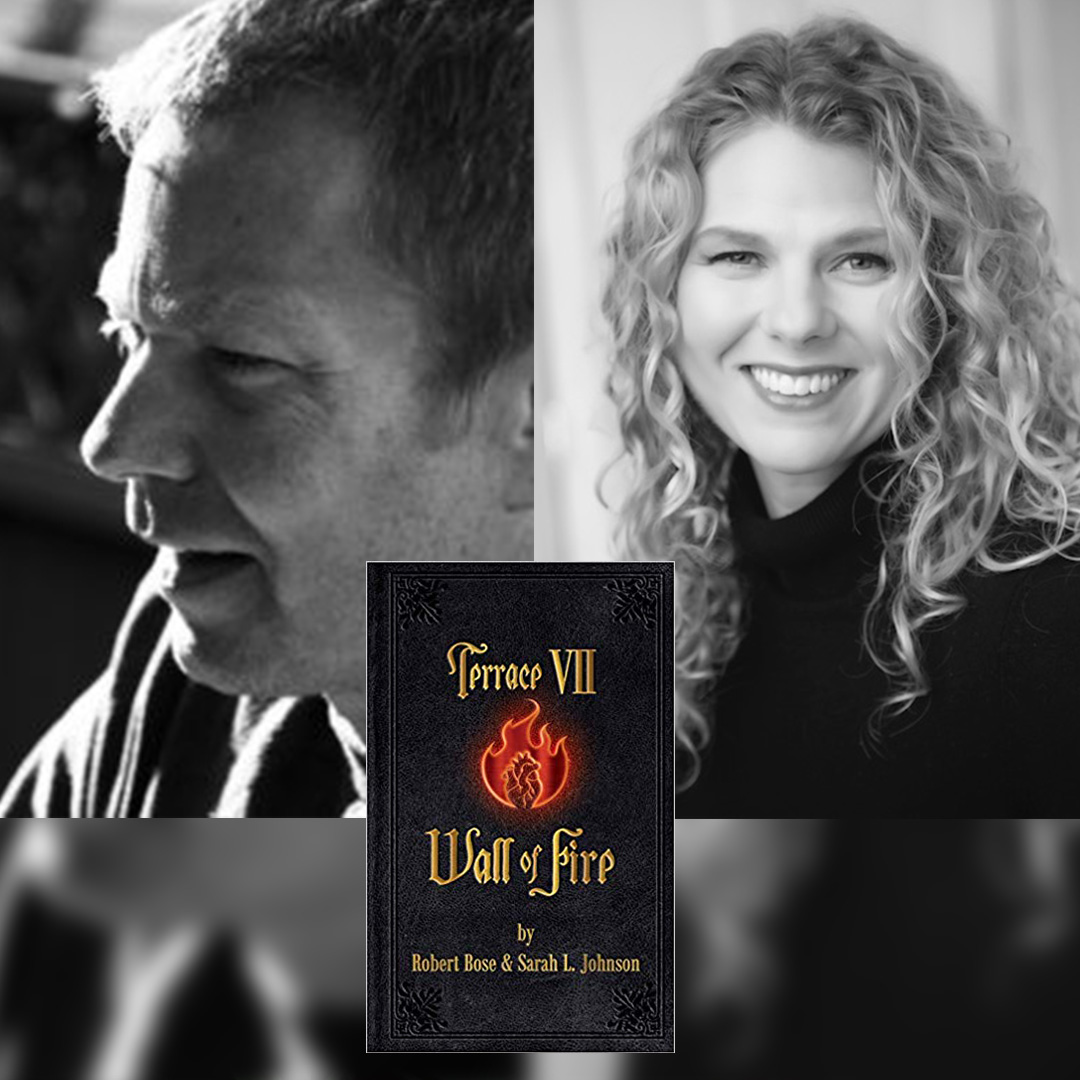 For November’s guest we welcome authors Sarah L. Johnson and Robert Bose. They both reside in Calgary and have written a range of work published through publishes houses such as Coffin Hop Press, On Spec, and their own known as The Seventh Terrace. Sarah has also contributed to the blog with the guest article titled “The Agony and Ecstasy of the Short Story”. Together, Sarah and Robert have written the anthology Terrace VII Wall of Fire, full of humorous horror, devils, and the disturbed. Let’s welcome them to the blog!

Thank you, Sarah and Robert, for joining us, can you both give introduction about yourselves?

And I’m a right handed, hobo-chic Lebowski, toiling over fiendishly sinister spreadsheets as the technical architect for a small Calgary software company. I run. I collect books. I devour the luck of poets.

How did you two decide to collaborate on the Terrace VII Wall of Fire, anthology?

I don’t actually remember. We always played around with informal co-writing for fun, but doing the book was probably a decision made while extremely drunk, or falling into mudholes on some terrible ultramarathon. Either way, it seems likely impaired judgment was involved, doesn’t it?

I’m pretty sure it started at Arby’s. Everything terrible always starts at Arby’s, or possibly in hot tubs after three plus bottles of rosé. But it definitely congealed while running. One recurring topic devolved into whether sex-dolls required heads. This lead to investigation into robot sex brothels and cumulated in curiosity around sex brothel robot cleaners. The rest is history.

Tell us about the Seventh Terrace and the Purgatorio Towers series.

An unexpected part of the co-writing process was the shared world we ended up creating for the stories. The Seventh Terrace is a nod to Dante’s Inferno and the tower of purgatory, where each of the seven levels corresponds to one of the deadly sins, with Lust being at the top. Seemed natural for us to set up shop in the penthouse. You can see all of Purgatory from there, and every lost soul with a story to tell.

Even before we’d jumped into writing the book, we’d had this idea of writing stories involving a malevolent uber-Factory, a mirror universe Amazon anchored in Purgatory with a strong Welcome to Nightvale vibe. The idea infused a couple of other stories we wrote, and it felt natural to continue with it. As we fleshed it out, we came up with all sorts of characters and locations, tying everything together with the actual Purgatorio Towers acting as a wrapper for the series.

I’d been working with Coffin Hop Press publishing dark crime and pulp, and we thought why don’t we start a little horror press and see how far we could run with it.

What’s it like working on the same story with another author? Pros and cons.

Cons? Rob forces me to be organized with his pathological love of spreadsheets. Pros? It’s the most fun I’ve ever had as a writer. Co-writing requires you to use new language, work in a voice not your own, navigate the architecture of someone else’s imagination. In doing so you conjure not only a story, but an entire universe that could not exist without merging creative energies. If that’s not a kind of dark magic, I don’t know what is.

Amazing. Our styles are different, yet blend together in ways I never expected. It helps that we spend a lot of time running together, kicking ideas around, putting together detailed outlines and splitting up the work fifty-fifty. The cons? She deletes all my cleverly injected adjectives.

What’s the next project for the both of you (together or separate)?

I’m working on a literary novella about a pharmacist who finds herself in an unconventional relationship with a hypochondriac who sells counterfeit batteries on the internet. We’ve also got six more levels of the Purgatory Towers series planned, the next of which is Gluttony, tentatively titled Terrace VI: Forbidden Fruit.

My current project is a Lovecraftian horror novel about a guy who takes a summer sabbatical in a small, creepy Colorado town so his girlfriend, who grew up there, can train for a difficult trail ultramarathon. I’m also working on a new short story collection, a couple of weird and wonderful collaborative short stories with Sarah, and, of course, Forbidden Fruit.

Collaborate, collaborate, collaborate. There’s nothing like it to cultivate creative depth and agility. It’s like improv in that the only real rule is to “say yes”. Your partner tosses out an idea, you pick it up and run with it. Don’t be intimidated. Say yes, and you’ll be amazed where it takes you.

Find your people. And yes, you’ll know them when you do. And your passion, which you already know, though maybe it’s buried deep down under all sorts of day-to-day detritus. Read what you want. Write what you want. Don’t let yourself be constrained. Ever. By anyone or anything. And, most importantly, eat at Arby’s.

Thank you, Sarah and Robert, for joining us!

You can find Sarah L. Johnson’s and Robert Bose’s work from the links below: