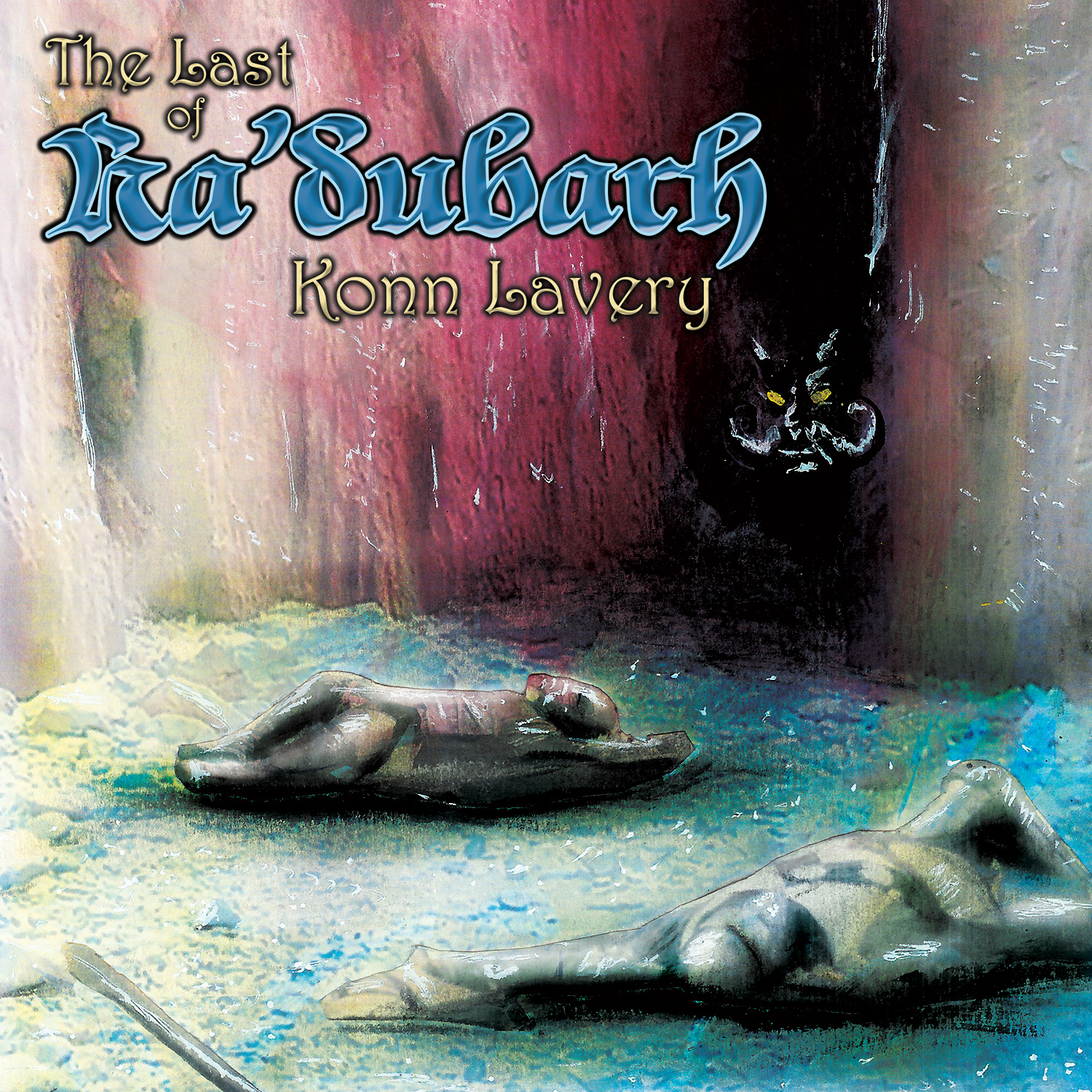 On top of the frozen wasteland of Ka-dubarh, brave men defend their families and village from their enemies – the trolls. One man and one troll are the last, will there be peace? Or blood?
The Last of Ka’dubarh is December’s flash fiction that’ll bring readers into a fantasy themed battle. Experience the story in written word, audio, artwork and soundscape.

Family means everything. The belief has been in the hearts of my people for centuries. Our blood is what binds us together. Unity makes us strong. The ancestral tree has grown steadily for generations, keeping us robust and pure. Each new generation carries on the legacy of the last, where we support one another, care for each other, and fight for one another even if it means the most significant sacrifice of all: our own lives.

Our views are why I find myself on the frozen plains of Ka’dubarh, crawling over dozens of frozen corpses. Some of them I recognize; hell, I even had them over for wine and pig back home. Now, their lifeless, cold faces are empty shells. Their souls have moved on to the afterlife. That leaves me here, alone, as the last.

My feet are numb, possibly from the blood loss, or maybe it’s the icy wind biting away at my flesh. I don’t know. What is for certain is I can no longer feel my lower limbs, nor walk on them. I’m crawling on my arms to push forward. The vast chasm leading out of Ka’dubarh is the one path that protects my people’s homeland from the outsiders in Zingalg. If I can just keep pushing on, I can crawl down the mountain and back to the warmer wilderness—back to my family.

I grunt. My arm gives out, and my face collides with the ice-covered chest of a corpse. Pushing myself up, I am eye-to-eye with a bark-like grey face. Curled tusks and an elongated nose come from the skull. The eyes are closed. Green-tinted icicles hang from the tip of the horns and the rims of the nostrils and mouth—blood. This is no friend. This is the corpse of one of my enemies—damn trolls. If they weren’t consumed by greed, maybe we could have found some sort of common ground. We aren’t that different, after all. It is only the name of our faith that separates us.

A groan rises directly under me as the chest begins to move, by the gods.

I push myself off the troll as it slowly lifts its limbs. The yellow eyes open as the ice cracks. The body rises. My enemy is alive and well.

“Goo’cha abuo,” the troll mutters in a deep tone, adjusting its leather helmet.

“Goddammit,” I whisper, patting my belt for my knife. Wait, where is it? I can’t find it.

The troll rolls onto its side, looking up at me. Its bark-like skin crunches into a scowl, adding depth to the skin’s texture. It lets out a nasty hiss. “Human!”

I extend my one hand, palm outward. “The battle is over. We can go our separate ways, back home,” I say. Maybe I can reason with it. Perhaps we can come to some form of an agreement and leave this blood-filled snowscape.

The troll attempts to get up but collapses with a yelp. Its leg has an arrow through it, proving it to be as crippled as I am.

“No battle over,” the troll says. “Your people shun us, and you will die for the dishonour.”

“We have fought! Look around you! Our comrades and friends lay slain. The battle is over.”

“No.” The troll reaches around its belt and pulls out a large, jagged black dagger. “For my fallen brethren!”

I’d thought the cold was overbearing. Now, I wish it were all I had. My hopes of survival are dwindling as I watch the troll crawl towards me with the knife in its mouth. I push myself to the side and scurry away with what little strength I have. The troll is directly in my path—the path leading back to the village. I need to get around it. I must get around it and get back to my family to see my wife’s face once more.

“Humans will pay!” the troll shouts, drool running down its chin and freezing midway from the cold wind.

“Back!” I shout, feeling the troll’s hand slap against my boot—a failed attempt to grab me. I pick up my pace, crawling faster, feeling my arms shake. The troll has longer limbs and can easily catch up. Time isn’t on my side.

The troll’s grunts and my panting breaths echo against the sides of the rocky chasm as we crawl over our poor fallen comrades. If only we had settled our differences in another way, I wouldn’t be looking down at some of my dear deceased friends as I flee for my life, hoping not to join them. My eyes are keen on the curved path ahead, and I’m focused on trying to move around the troll. My lungs burn. My body begs for me to stop moving, wanting me to end it all right now, stop trying, stop fighting, and join the dead. I can’t give up. My wife and my son wait for me back home. I didn’t come to Ka’dubarh with my comrades to die. I came to defend my family and return to them alive.

A piercing sound comes from behind, and a sharp pain spikes from my ankle. I let out a grunt, realizing the troll got me. The leg is so frozen that I barely noticed the pain until the blade had sunk deeper into my limb. I turn around, kicking the troll in the face. I don’t feel the impact on my numb foot against the enemy’s nose; only my thigh responds to my command. The blow makes a crunching noise. The troll hisses, letting go of the dagger embedded in my flesh.

“Give me strength, brethren,” I say, clenching my teeth. Even with the weapon in my ankle, I continue to crawl. The sound of the troll’s movement picks up in the crunching snow. It’s on the chase again.

“Your people hate our kind, kill our kind. I will gut you!” the troll shouts.

Now, I realize I can’t out-crawl this troll. It has far more energy than I do. They are more resilient and have more stamina than humans. It isn’t willing to be reasoned with—no surprise. I have no choice but to fight.

“You,” I grunt, rolling onto my back, arching to reach for the stabbed leg, “invaded our land.” I coil my hand around the large dagger. “Ka’dubarh is the sacred entrance!” I shout, yanking the weapon from my ankle. Some blood pours out of the wound and onto the snow, quickly freezing.

The troll roars, clutching both of my legs. “Ka’dubarh hides our holy temple.”

“Then why do you shed blood on the holy?” I growl, pushing myself upward, thrusting the dagger at the troll’s arms. It lets go of my limbs and rolls away, and the dagger stabs ice. I fall forward, crawling towards the troll. Oh, how the tables have turned.

“Our ancient temple belongs to us!” the troll says, moving on top of the corpse of one of its allies. It pats the body, searching for some sort of weapon. A toothy grin fills the troll’s face as it pulls a smaller dagger out from the corpse’s belt. “We will claim back our land,” the troll says, hurrying towards me.

Here we go. A sharp, biting wind blows past us; my hair covers my face. This is it, the final battle of Ka’dubarh. I pray that my people will give me the strength to avenge my fallen allies, for I fear I cannot do this alone.

The troll roars, forcing itself onto its knees, giving it the upper hand. It makes the first attack, slashing the knife down. I roll out of the way and plunge the blade into its outer thigh. The dagger pierces its skin, causing it to roar. The troll backhands my face, and I land on the snow, clutching the dagger tightly. Thick forest-green blood oozes from the troll’s new wound.

“You will die, human!” The troll thrusts the knife down at me; the blade pierces my gut. I cry in pain, mustering the strength to stab my foe. The blade impacts the troll’s chest, piercing the lungs. It pulls the dagger out of me and slashes the weapon down again as I lunge up once more. Our weakening bodies make our attacks clumsy; we are victims to each other’s weapons, puncturing our torsos repeatedly. Red and green liquid sprays over each of us, our blood mingling, sprinkling the snow.

The troll howls in pain as its strength dwindles. It nearly falls on top of me, using its one free hand to keep upright, still poking at me with the knife. The pain is too great, and I feel the blood in my mouth. I have to believe it’s only in my mind. I can overcome this, for the adrenaline is coursing through my veins. The spirit of my fallen people surges through my body, giving me the strength I need to defeat this foe. I have to. I must honour them!

Letting out a roar, I rush the blade up, piercing the troll’s heart. My enemy gags, dropping the knife as it collapses onto me. The tusks scrape against my cheek, slicing the skin open as saliva drizzles down onto my face. The vile stench of mould and rotten meat reeks from the body—the typical troll smell. I never thought the stench would be the last smell I ever experienced. I suppose it doesn’t matter. After all, I had defeated the enemy; my people gave me the courage and strength to make one last critical blow.

I lay in the snow as blood runs out of every new and old hole in my body. My warming flesh and the glowing sun overpower my mind, causing all of Ka’dubarh to turn white. My overstimulated senses relax. My breathing slows down. The vile stench of the troll dwindles and is replaced with a soft, sweet aroma. A familiar one . . . is it? Yes. My wife.

My vision fades, and only the white light remains . . . I am warm now, and feel no pain. My family is near, and they’re safe. We defeated the trolls at Ka’dubarh, protecting our village. My family can live peacefully now, and I will reunite with them in the next life.