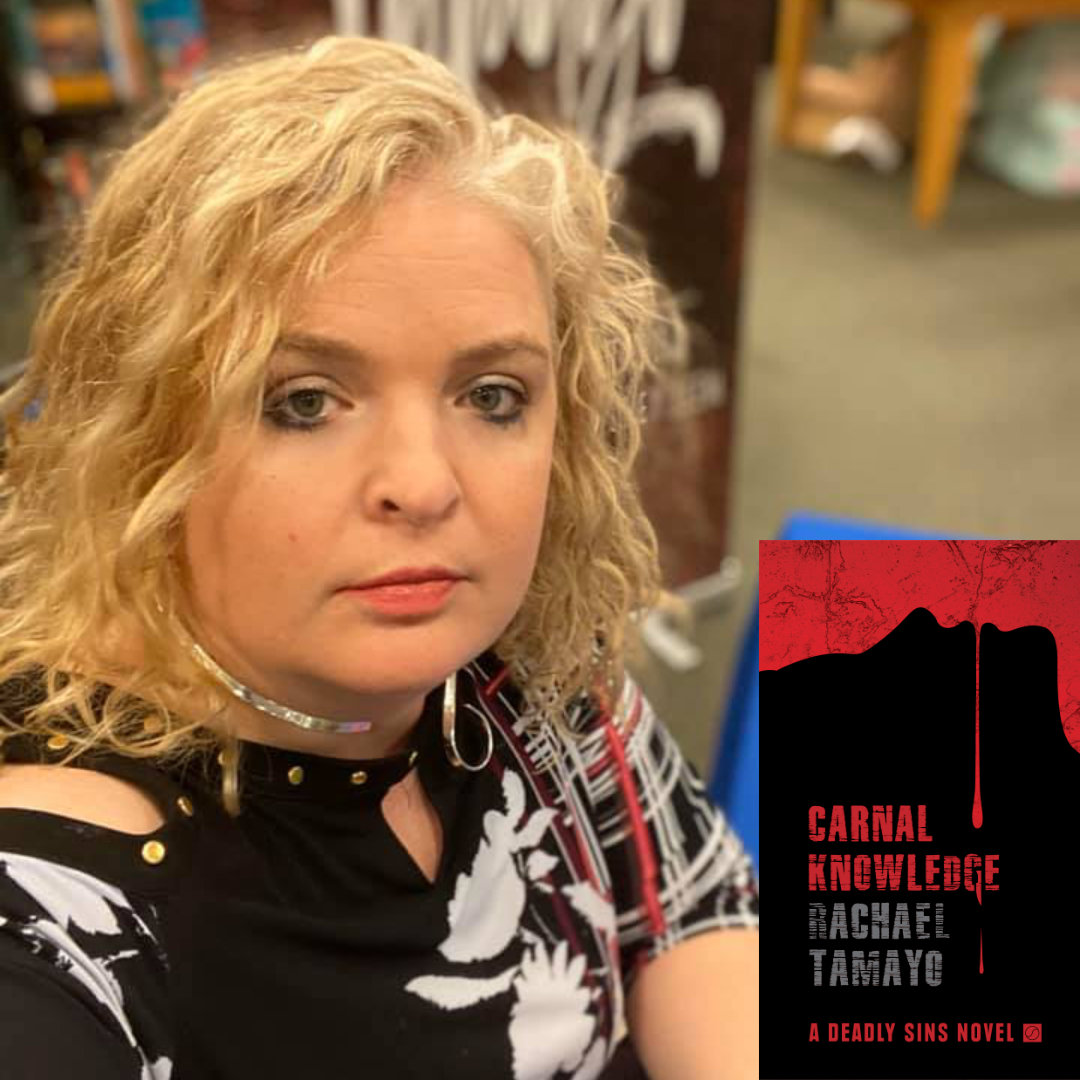 For March we welcome the award-winning psychological thriller author Rachael Tamayo. Her work has ranked in the top sellers on Amazon and has been recognized by the Rone Awards. She had spent twelve years as a former 911 emergency operator and police dispatcher. She uses her expertise on human behaviour to explore fiction.

Thanks for joining us Rachael Tamayo, can you introduce you and your writing?

Thank you so much. I wear many hats, as they say. I’m a former 911 dispatcher, a veteran of twelve years. I am a wife and a mother of two. I have written eight published books to date. I got back into writing in my late thirties.

Tell us about it and your new The Sin of Greed novel for 2021 and the A Deadly Sins series it is a part of.

The Deadly sins series is set to be a series of seven stand alone thrillers, each about one of the deadly sins. To date, the first two are out. Wrath and Lust. The next is set for sometime this year, Mine: The sin of Greed.  Honestly, this is the most head spinning complicated book I’ve ever written.  I stepped out of my comfort zone with this one with this complex plot. I can honestly say, you just won’t know what is coming, or which way is up in this one. It’s so full of twists and turns, and once again it’s got a nice shocker at the end. But this one is chocked full of unexpected shocks. I can’t wait to get it out there and into the readers hands.  I really love to write a book that is different. Not your typical tale of greed, and I don’t think there is anything typical in this one!

You started writing romance first, what made you want to shift into thrillers?

I always wanted to write thrillers, but I was afraid I wasn’t good enough.  It took me a few books to work up my courage and sit down and write Crazy Love, my first thriller.  It was so well received, and readers still ask me for a sequel, so I’ve settled down into the genre and found it’s where I belong. I love writing head-spinning psychological thrillers, and have no intention of stopping.

What’s the most bizarre experience that you can share regarding your dispatching career?

Ugh, there were so many. I’ll have to say the most disturbing one was the story I told in a TikTok video that went viral, has close to two million views now. I received a call from a woman that told me that her fourteen-month-old twins had drowned in the bathtub, but her story didn’t add up. I took the call from her, asking questions along the way, and all while my gut told me it wasn’t what she was telling me. Once off the phone I started to cry and told my partners that I was certain she’d killed her babies. Sometime later she pled guilty to criminally negligent homicide.  The video is still up on my Tiktok, telling this story as well.

After The Sin of Greed, what’s next?

I’m in the middle of writing Of Blood and Bone: The Sin of Envy. Honestly, it’s coming out so fantastic that I can claim it as the best of the series so far.

Any advice you’d like to offer new writers who read the blog?

I stopped writing in my early twenties, and I didn’t pick it up again until I was in my late thirties. It boggles my mind when I think of where I might have been if I hadn’t done that. Don’t give up. Keep writing, seek advise, listen to that advise, and don’t ever be afraid to start over and make it even better.

Let’s thank Rachael Tamayo for joining us to talk about her work!