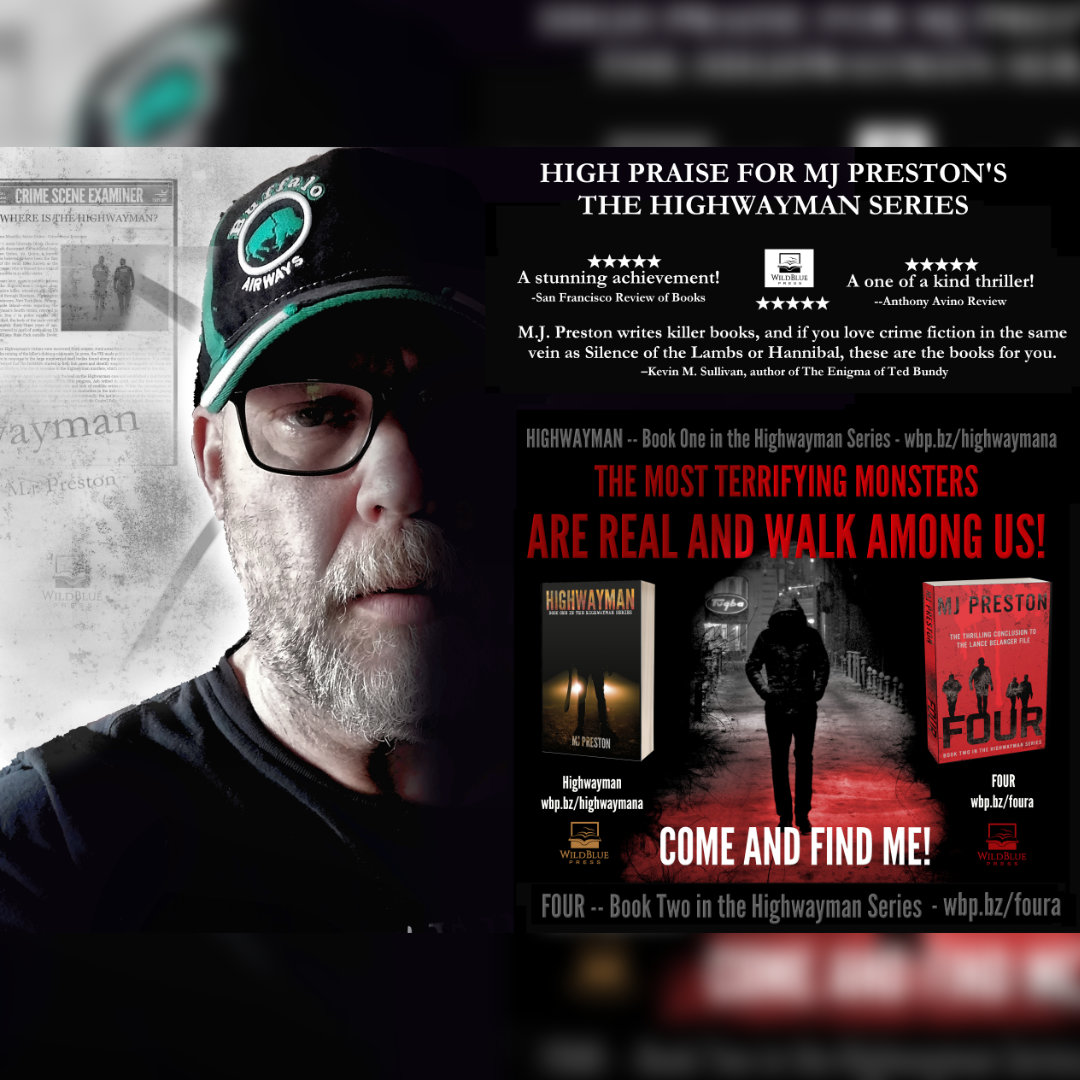 For November, we welcome MJ Preston, a Canadian Horror author, and a visual artist. His debut novel The Equinox has received great praise, being a semi-final contender in the Amazon Breakthrough Awards. His Syfy Horror, Acadia Event, called “An Epic Page Turner,” was inspired by his time as an ice road trucker. Now he’s written two crime thriller books to kick off The Highwayman Series, starting with the self-titled, Highwayman and Four, the concluding novel of The Highwayman story.

Since his first novel, MJ Preston has continued to publish books and has appeared in anthologies. Now, let’s welcome MJ Preston to the blog and learn about his writing!

MJ Preston, thank you for joining us. Can you give readers a brief intro about yourself?

MJP: Sure, first and foremost, I am a Canadian writer who has been a soldier, a property manager, a long haul, and an ice road trucker. Trucking has taken me all over Canada and the United States, including the Northwest Territories. Somewhere in all that chaos, I managed to write the four books you so eloquently introduced. My first three novels, The Equinox, Acadia Event, and Highwayman, were all written on big trucks’ steering wheels. Which is to say, every time that truck stopped, I would put my laptop on the steering wheel and write. The genres I write in are horror, Syfy, and crime thriller. Some people ask me where I get my ideas, and I respond, “By watching you.”

Your latest novel Four, is part two of The Highwayman series. Tell us about the new novel and the series itself.

The Highwayman series is about individual cases of serial murderers and the law enforcement officials who hunt them. The first two books, Highwayman and Four, envelope a single story. The Lance Belanger case file. The first book introduces readers to the aspiring murderer, Lance Belanger, aka Highwayman, who longs to be a household name in the world of serial murder. He considers murder his vocation. And like other career-minded individuals, Lance wants to be the best, the most prolific, the most wanted, the most infamous. Book one takes us on an eight-year journey where Lance experiments, learns and becomes more proficient at killing and working toward his goal of being number one on the FBI’s ten most wanted listed. He accomplishes that mission, becoming an enigma known as The Highwayman.  The issue for investigators is that he leaves little evidence to go on. There are no fingerprints, no DNA, and no witnesses.  His signature is that he cuts his victims into six pieces and stages them like a starfish. His victims turn up all over the United Staes in multi-state body dumps. It seems almost fruitless for the FBI, but there is always something if you listen hard enough for the crazy

In my latest novel, Four, the pace is much faster. The investigators have identified who Highwayman is, and the hunt is in full swing to take him down.  Highwayman continues to increase his kills, always working toward a life goal of being the most infamous killer of all time. Through the dark web, he recruits three other killers, and together they perpetrate mass murder in Pittsburgh and in the outlying Pennsylvania rural communities.  This book is chock full of murder, betrayal, and even abduction.

Four is the concluding novel . . . is there more planned or are you moving onto new writing projects?

I am working on a new Highwayman novel, with returning characters from the first two books and a completely new case file. Although this is not the finished title, it has a working title called THE ICE CREAM MEN. I don’t have a publication date just yet because I’m just getting revved up. But I’m the first on the scene of the crime and having great fun, so I think fans of this series will be happy.

Most of your work falls under the horror and thriller categories, do you take genre into consideration when writing a new book?

I certainly do, but I don’t limit myself to a specific genre. I have been called a horror writer, a sci-fi horror writer, and now a crime thriller writer. I just think of myself as a writer who digs penning tales about dark subjects and even darker subject matter. For a long time, there existed a snobbery in the writing community when it came to horror. Back in the 70s and even 80s, horror was looked down upon by many in the mainstream writing community.  Even Stephen King ate crap about his writing from critics. I think we are moving away from that now. Horror writers have gained acceptance, but here’s the truth. It’s all just storytelling. While I’m not John Steinbeck, and my work will never be up there with such greats as The Grapes of Wrath or Of Mice and Men, I am still a storyteller. I have a place in the storytelling community afforded to me by readers willing to set aside time in their schedule to indulge the madness that is MJ Preston.

You are also a visual artist, using digital and camera work to do your own covers. Do you enjoy the cover creating process?

I do very much. I like to do renderings, but I’m certainly not as good as artists such as yourself, who put my work to shame. Regardless, I believe that it helps me in my writing to do these visual things. Whether it’s a silhouette of a man standing in front of headlights of a car machete in hand, or it’s a bone-eating alien buried beneath the tundra of the Northwest territories. These renderings and photographs help get me into that weird headspace for writing. Often, if I find myself wondering where I’m going to go next with my writing, I’ll open up my paint program and put on some tunes to help me focus.

What got you into writing, with your debut The Equinox?

The Equinox was my 18-year novel. [Laughs.] When I started it, I was just a young man, and by the time I finished it, I was middle-aged. From 1986 to 1998, I was a Canadian soldier, and I was also married and the father of three children. Often I was gone for months on training exercises. At some point, I realized that finishing that first book wasn’t going to happen, at least not yet. So, I put the manuscript into a box, intending to revisit it later. I had no idea that it would be almost 16 years. I continued to write military reportage, editorials, and commentary, but the manuscript was forgotten. In 2010, I found that dog eared manuscript in a box and decided it was time to finish it. Even after I published The Equinox independently, I had no idea that I would write another novel, but here we are.

Do what you love. But don’t expect overnight success. Writing is a very tough gig, and if you’re lucky and you work hard at it, you will get more out of it than you put into it. Fair warning, there is a mandatory period of suffering that all writers must endure on their journey to success. Please don’t ask me how long it lasts. I’ve been at it for over fifty years 😊 and still can’t get through to customer service to find the end date.

Let’s thank MJ Preston for joining us again on the blog!

You can find his latest work on the website, amazon, and the various links below: