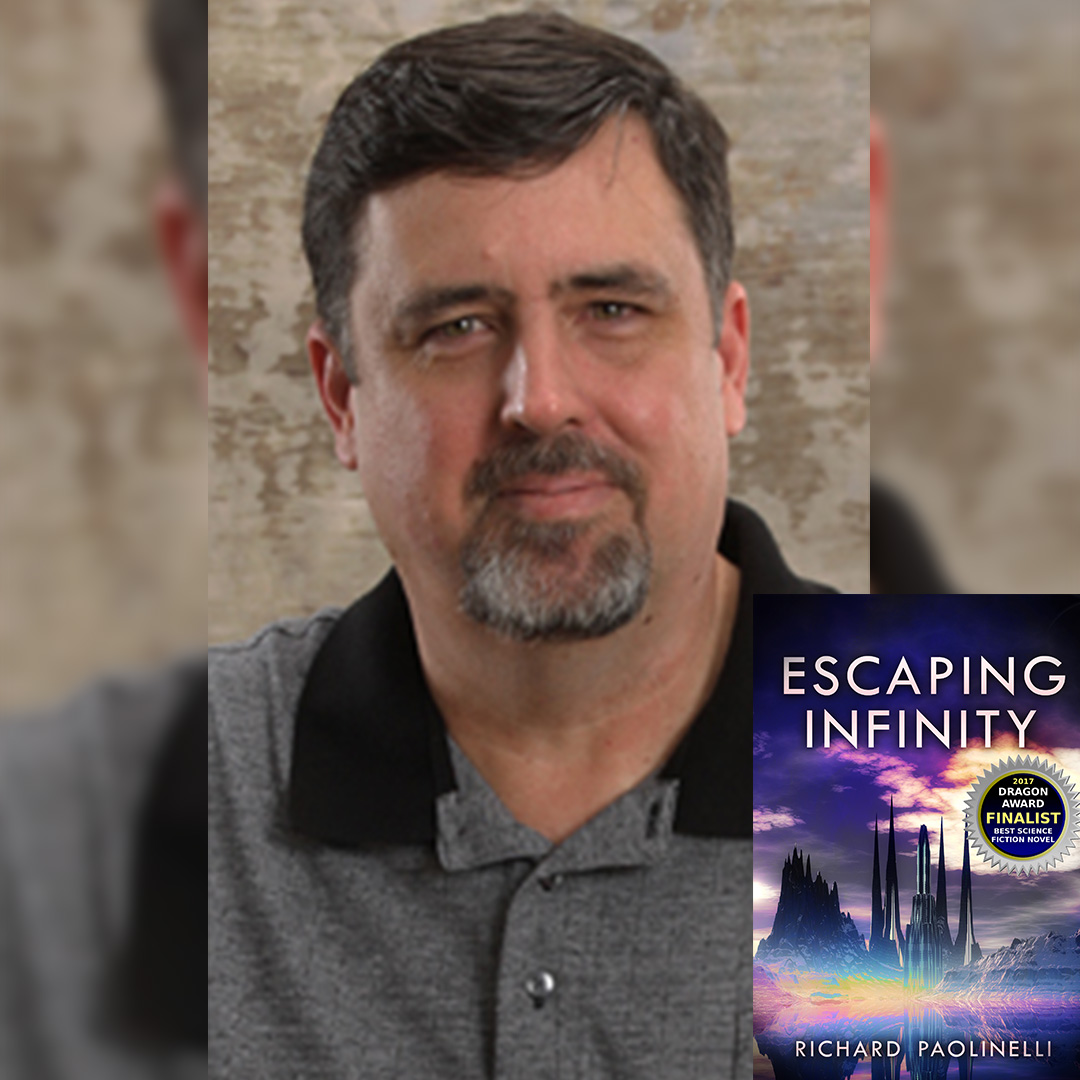 This month’s guest is Richard Paolinelli who comes from a sports writing career. In 2010 he retired from this craft to return to his fiction roots and follow his passion of storytelling. He had released two short stories The Invited and Legacy of Death – as well as a full-length sci-fi novel, Maelstrom prior to 2015. Since then he continues to write new works of fiction.
Let’s welcome him to the blog and learn more about what he is writing!

Thank you, Richard Paolinelli, for joining us, can you give a brief introduction of yourself?

I began my writing career as a freelance writer in 1984 and served as the lead writer for the first two issues of the Elite Comics sci-fi/fantasy series, Seadragon. In 1991 I was hired as a sports writer for the Gallup Independent in New Mexico and worked for papers in New Mexico and California and won the 2001 California Newspaper Publishers Association award for Best Sports Story.
In 2010, I retired as a sportswriter and returned to writing fiction. I’ve written six novels – including the Dragon Award Finalist (Best Sci-Fi Novel), Escaping Infinity – three Sherlock Holmes pastiches, two non-fiction sports books and three novellas. I’m serving as co-editor for one of the 11 volumes of Superversive Press’ Planetary Anthologies (Pluto) and will have short stories in several of the other volumes as well as three other anthologies that are to be released throughout 2018. My third full-length science-fiction novel, When The Gods Fell, is scheduled to be released on September 4, 2018 by Tuscany Bay Books.
I’m a partner in Tuscany Bay Books with Jim Christina, a co-host on the weekly radio show, The Writer’s Block on LA Talk Radio, and I recently founded the Science Fiction & Fantasy Creators Guild (www.sffcguild.com) a not-for-profit organization aimed at promoting science-fiction and fantasy and its creators in many media platforms.

Tell us about your latest novel, Escaping Infinity, which was nominated for the 2017 Dragon Award for Best Sci-Fi Novel. 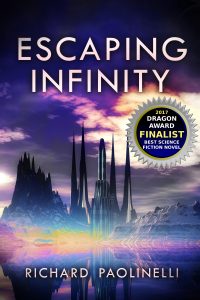 I’ve often said I could write a book about the journey writing this particular book took. It’s a sci-fi/thriller that deals with a traveler who checks into an amazing hotel out in the middle of nowhere and quickly discovers that there is no way back to the outside world. Not only that, it appears tomorrow never arrives inside the Infinity Hotel, and with the aid of an enigmatic front desk clerk he fights to escape the trap he has found himself in. But he eventually discovers there is a lot more riding on him solving the mystery than just getting back out.
It has been very well received and was honored with being a Finalist for Best Sci-Fi Novel in the 2017 Dragon Awards at DragonCon. It was also nominated by a few members of the SFWA for a Nebula Award. While it did not earn enough nominations to be a final nominee for a Nebula, I was incredibly honored that fellow sci-fi writers thought that highly about the book to put it up for consideration. It has also picked up three other awards, including one for its cover, and I have been very happy with the recognition the book has earned.

Shifting careers into writing fiction is a big jump, tell us about how you approached this transition? Was it night and day or was it a slow migration?

I think the fact that early in my freelance writing days (1984-1991) I was writing a little bit of everything. Stories on a meteor crater in West Texas one day, a golf tournament the next day and the story/script for a small comic book series the next.
So after my years as a newspaper writer (1991-2010) ended and I decided to go back into fiction writing it really wasn’t that huge of a culture shock for me. What made it easier was that while I was working on my fiction novels, I was also tackling a couple of non-fiction sports books that I released in 2015 & 2016. So I never really felt like I was a fish out of water or anything like that. Now that I am about 18 months into doing nothing but fiction it feels very comfortable. I imagine if I wanted to, I could take on another non-fiction sports project and still manage to crank out fiction works without having to adjust too much.

What do you personally prefer writing –  Science Fiction or Fantasy?

I’m definitely more of a sci-fi guy, but I still manage to incorporate some elements of fantasy in my sci-fi novels where I can. Oddly enough, the book I am working on right now is more fantasy with sci-fi elements in it.

These genres often require a lot of backstory and world building, do you have a system in place for it?

Not really a system, per se. I tend to focus on my characters’ backstories more in my stories. But I don’t mean to downplay world building in the slightest because it is as important.
When I start to create my next novel, in addition to a synopsis and outline with notes, I do build a bible of sorts with all of the additional information that I feel needs to be worked into the story at some point. I have found that this helps me build up the world the novel exists in as well as develop the people and creatures that inhabit it.

What’s next in your writing career now that Escaping Infinity is released?

This year will see stories I’ve written appear in several anthologies – I’m even editing one of the Planetary Anthology Series (Pluto) by Superversive Press – and I am just about done with my next sci-fi novel, When The Gods Fell, which is due out in September. I am hoping to close out the year with one more sci-fi novel, Cursed Firstborn, as well.
But a project I am really looking forward to completing this summer is a pre-teen sci-fi/fantasy novel that I am writing with my eldest grandson. The working title is, Timeless, and I hope it will be the first in a series of books.

Keep writing. If this is your passion then don’t let anyone talk you out of doing it. You will learn something new about the craft every time you write the next story that will make you a better writer. So keep writing, keep learning and in case I haven’t mentioned this yet, keep writing!

Let’s thank Richard Paolinelli for joining us to talk about him writing!

You can find Richard Paolinelli’s work at the links below:
scifiscribe.com
Amazon
You can also follow online him at:
Twitter
Goodreads