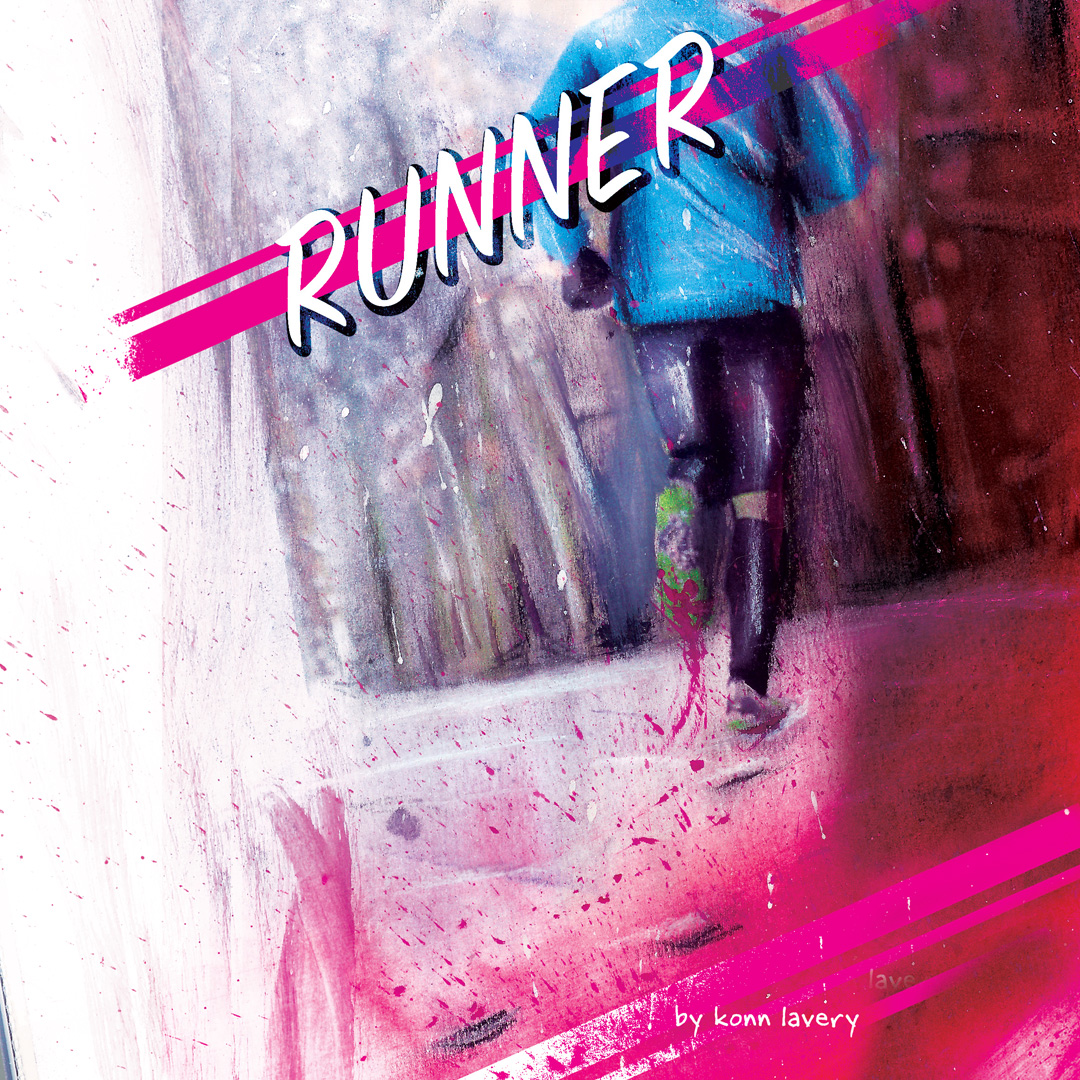 Runner is the first of the monthly short story with each containing a transmedia storytelling experience. The story, artwork, and audio component is included. The story can either be listened to in audio format or read directly below.
The purpose of these flash fictions is to offer some fun tid bits to read while I am working on the next novel for you to CONSUME. Feel free to listen to the story, or read it, and share with your friends!

The blue windbreaker zips up. Shin-protection socks are pulled on; shoes, tied; toque, on; and Bluetooth earbuds, in. The smartphone syncs to the earbuds, with the music app set to the workout playlist. Everything Dan needs to start his run is in place. As with every day, his head is groggy at six a.m. It doesn’t help that he had a late worknight the day before. His lifestyle’s hours don’t bug him because he enjoys getting up at this time to embrace the brisk morning. It is technically spring, but there are no signs of the snow melting anytime soon—typical of Alberta.

“Let’s do this,” he mutters, getting up from his seated position. A late-night-early-start day doesn’t motivate him to go for a run, but he knows he’d regret not doing it. The clarity of mind, the physical fitness, and the sense of refreshment post-run are not outweighed by the cold. Dan exits his condo, locking the front door, heading down the flights of stairs and out the lobby. He takes in a deep breath through the nose, feeling the crisp air enter his warm system. He presses the play button on the earbuds, bringing the electronic bass to life.

All right, he thinks, recognizing the beat—a favourite track of his to get energized for a workout.

Jams are on. Motivation is growing. Time to burn calories! Dan bursts from his walking speed, exiting the front of the condo towards the river. He glances down both sides of the street before dashing onto the road, covered in fresh snow. This early in the day, there is barely any traffic, like real-life Frogger on easy mode. He breathes steadily, moving on the familiar path he takes every morning, down a set of stairs. After the staircase, the path continues alongside the river. From here, he can see downtown just south of the river. It is always a beautiful sight this early on. Dan keeps a steady pace, eyes looking down at the fresh snow. There are a few bike tire imprints but no shoe imprints, which is a big ego boost for Dan. He thrives on knowing he was the only one dedicated enough to focus on his run consistently throughout the year this early in the day. Summertime is when all the posers come out and run.

Just over three kilometres into his run, or three songs later, the peaceful snow suddenly is marred by footprints and pawprints. Both start from the forest to his right and continue on the path. The footprints are behind the pawprints until a splash of red sprinkles the snow.

What? Dan slows his pace. The pawprints are more condensed here, and the blood is more prominent. Farther ahead, the blood smears the snow in a broad stroke spanning several meters before disappearing back into the forest. Dan stops in his tracks, panting as he presses the pause button for his music. He’s slightly annoyed that his run is being interrupted. Reason prompts him to ask—what is he looking at?

Dan unzips his windbreaker so he can reach for his smartphone tucked in the inner pocket. This is too weird not to report to the city. He takes off one glove to swipe his phone, unlocks it, and dials nine-one-one. As the phone rings, he checks to see the path is empty behind him. He is entirely alone.

“Hello, this is nine-one-one. What is your emergency?” says the operator.

“That’s right.” Dan turns to examine the trail of blood. “I was just on my morning jog down by the Bow River and saw some fresh blood, some animal tracks, and shoe tracks.”

“Is anyone else there?” the operator asks.

“No, just me. Think I will be heading back, though.”

“All right. For future reference, call three-one-one for disposal of animals,” the operator says.

“Yeah, I know that, but there’s a lot of blood. I’m just trying to do what is right here.” Dan exhales. Is she stupid? he thinks.

“We appreciate your concern. Where exactly is this?”

“I had just crossed onto—” Dan’s sentence cuts short as a snapping twig catches his attention.

Where the blood ends, a tall, broad-shouldered being, presumably male from the size, bursts from the shrubs with a blood-dripping machete in hand. The hood of a nice, slick, premium ski jacket is pulled over the ski-mask-covered face.

“Oh shit! St. George’s Island!” Dan shouts, dashing back down the trail. His legs stumble slightly before he regains his balance. The limbs are weak from the sudden stop-and-go in his regular run. The few hours of sleep he managed aren’t helping his body to recover quickly, either. Dan clenches the phone with one hand and his glove with the other. He feels his muscles burn from the burst of speed. He takes one glance back to see the man is closing in on him. Is this man a runner too? He has that nice ski jacket—admirable—but the man also has a bloody machete. Come on, Dan!

The muffled sound of the emergency operator comes from the phone. In the moment of panic, Dan forgot about the operator on the line. He brings the smartphone to his ear, saying, “Help! Send help! A man with a machete is chasing me.”

“We have a unit on their way. You said by St. George’s Island?”

Dan makes a swift turn left onto the bridge, crossing the river. His steps are wobbly from his rapidly tiring legs. Heavier steps echo from behind, the stomping footsteps of the man with the blade. He has to be getting closer.

Don’t look back, don’t look back, Dan thinks. His lungs burn and his legs are jelly, despite the burst of adrenaline. He reaches the end of the bridge at a fork in the road and collides with a passing bicyclist. The impact sends him flying to the side of the pavement; he loses his grip on the smartphone and skids in the snow. The bike tumbles, launching the rider off of the seat and shoulder-first onto the concrete.

“Shit!” Dan rolls onto his back and tries to get up. His feet slide on the ice that’s hidden below the snow. He looks to the bridge, only to see no one, then at the fork in the road, which is empty. He turns to his left—no one; right, nothing. He looks back to the island, then the bridge—nobody. The machete-wielding man is nowhere.

“Christ,” mutters the bicyclist while taking off her helmet.

Dan wipes his face, looking around one more time to see if he missed the machete-wielding man. No. He is gone for sure. Dan can’t help but smile to himself with relief. He’d gotten away, proving to be the better runner; Dan, the man, the best in the city. He’d always known exercise was good for your health, but who knew the results would be so sudden.