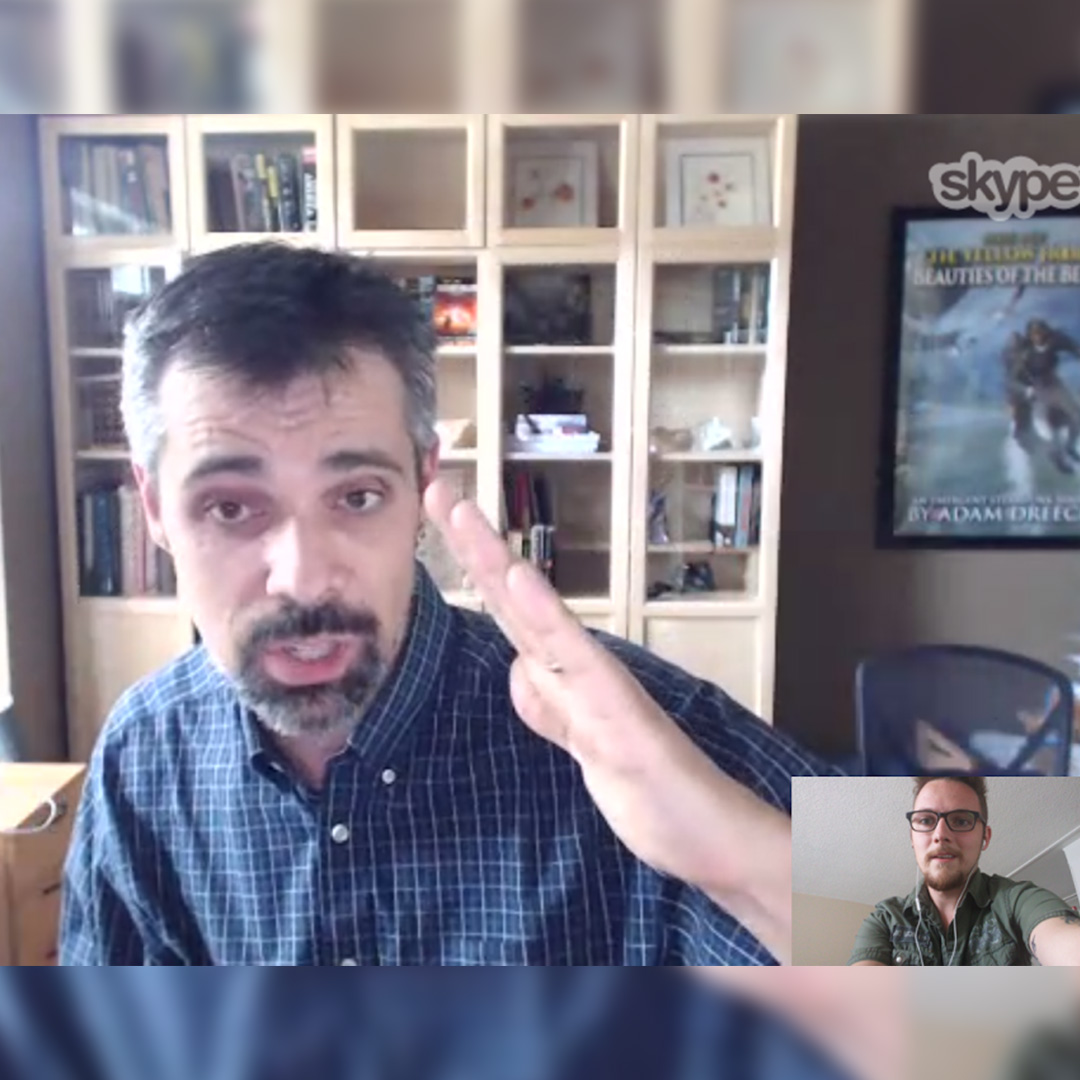 This month’s guest author is Calgary’s Adam Dreece. He is well known for his bestselling steampunk series The Yellow Hoods. Adam had a presentation at this year’s When Words Collide about the road of indie publishing, outlining some of the obstacles along the path and how to overcome them. It was truly an insightful session. Adam is also has finished a new novel titled The Man of Cloud 9, a Sci-fi story.
We had a Skype session together where we chatted about his work, career and the life of a writer. 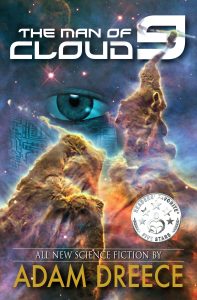 Thanks for taking the time to chat, tell us a bit about your new novel, The Man of Cloud 9, that is available September 30th.

The story takes place 70 years in a future that has a world that’s damaged both in infrastructure and socially. Particularly the people have abandoned the concept of moving forward for a better tomorrow and innovation moved towards about solving the problems of their present.
The plot follows a Steve Jobs-like character named Nico Rafaelo who is like that classic Silicon Valley genius who has an idea for reviving the technology of nanobots and human microbial clouds (an aurora surrounding each person made up of dust, bacteria and particles). Nico wants to use these clouds as a battery for the nanobots. He has a vision of bringing back the ‘old world’ like video conferencing. It’s about the inventor vs the corporate beast that this world has created. As you go through the story you discover Nico’s company which has intentional parallels to Steve Jobs.
The primary advisory basically represents the reflection of people’s inner failings and seeing the work of Nico to be a giant billboard of their letdowns and feel the need to destroy him. This has been a reflection of my past both personally and professionally.

Have you found any challenges with writing Sci-Fi vs other genres you’ve worked in?

The background of being a software engineer made the tech come naturally. The writing was a lot more cold and suppressed in emotion than other genres. I enjoyed finding the right balance of how much science you put in mixed with the story telling. So it’s not too fantasy and not too technical.
This book and The Wizard Killer that I wrote were objectively meant to have me take risks and expand my audience. I wanted to show a different side of me. I had comments from long time sci-fi readers who found it like sci-fi from the 60s. It is focused on grounded storytelling that happens to take place in this otherworldly setting. I had some non scifi readers enjoy it that it didn’t go too deep in technicalities.

What inspired you to write a science fiction novel?

There were two things: After finishing the fourth novel in The Yellow Hoods, I needed a break. A friend of mine half-joking asked me to write a short story about microbial clouds. I had an idea and wrote 5,000 words, realizing it needed a tweak and it became 10,000 words, then 15,000 words and I realized I had a lot more to say.
Along the way I also began to pull ideas that I had parked previously and mined some of my background for concepts.

If you had to compare The Man of Cloud 9 to another story, which one would it be?

I was told that The Wizard Killer had a “Mad Max vs Lord of the Rings” and “Harry Potter meets Die hard”.
With The Man of Cloud 9, several of the early readers finished the book said it stayed with them for days. I didn’t get a comparison from early readers which was interesting for this book.
The movie Gladiator does comes to mind, except the era. It follows the concept of someone who is from up high, brought down low, and ultimately has to face their nemesis with their unwilling nature to give up their ideal.

Do you think you will continue to write in this genre or do you have a future direction in mind?

In sci-fi yes, a sequel to this, that I don’t know. I had early readers ask, or rather tell me that I am writing a sequel. I’m not sure if I will. I will write sci-fi space operas that will be very different than this novel. I have a couple of ideas based in the universe of The Man on Cloud 9, but I need it to sit for a bit. I got The Wizard Killer sequels and the next The Yellow Hood book to write.
I look at choosing the next book to write from a philosophical perspective: Does it have an effect on the world? Or I am doing it for myself? I also need to take a step back from a novel to remember the original intention of it. Maybe in January I will reflect The Man of Cloud 9 and revisit it.

At When Words Collide, you mentioned you used to be a software developer before becoming an author, how did you go about this transition?

When I was in my early teens, I started doing 2 things, playing a lot of DND (being the DM and coming up with stories) and teaching myself programming. So I always stayed with those, getting up at 5AM or 6AM in the morning and working on them throughout the day. Between those two things that took up my time.
I took computer engineering in university and became a solution architect for small companies and big companies like Microsoft.
I am a guy who loves ideas, not technology. Ideas have the element of people, the element of impact and the product itself. You need to understand what that product’s purpose is and who the audience is.
When we moved to Calgary in 2014, I had a big opportunity with software engineering while writing The Yellow Hood. Once that contract ran out, I hadn’t seen much of an opening in that industry since the .com explosion came to an end. My wife saw I had a good thing going with writing and encouraged me to pursue it. The IT background has helped me with the large-thinking planning that comes with writing series and drilling into the small details.
Also being a stay-at-home dad keeps me pretty busy.

You do more than just write, you do public speaking as well. Was this a skill you had prior to writing?

No. I wrote for 25 years and did nothing with it. The writers I had around me were very discouraging. In 2003 when I was at Microsoft, I signed up to be a co-speaker for a program that was running across the country. It was terrifying but I wanted to be able to stand in front of at least 1,000 people and be able to present. The whole thing went really well but was very stressful.
One thing I also learned about being a dyslexic is learning to role with whatever you said, don’t try and stop to fix it. Just role with it and people won’t notice the error because you made it unimportant.
A director over at Microsoft once said to me his key to success was try to outrun your mistakes instead of fixing them.

For aspiring writers, what advice would you offer them to convert their writing into a career?

First, the key message I give at all my talks is to give yourself permission to make a mess.
The second is recognize that building a career is an 8-10 year endeavor. Chances are it is not going to be your first, fourth or sixth book. It’s about applying yourself every day to move your author career forward. I personally don’t write every day, but I do at least one thing to support my writing so I am better off today than I was yesterday.
The last piece is to recognize that being an author is about having team. Not just the supporters and fans, but anywhere you can get advice. I have a cover designer and an editor. Knowing that having them focus on those aspects of the novel allows me to write more.
Recognize that everyone has their own speed. One person might be able to pump out a book a month and other people might take 3 years to do so. This doesn’t make one right or the other wrong, you have to find the speed of your voice without jeopardizing quality.
In a recent blog post I talk about anxiety and my long time workaholic behavior, having the feeling that you are never doing enough and how I own these symptoms.
A lot about being an author is developing grounded, sustainable, productivity and creativity and you got to slay a lot of personal demons along the way. 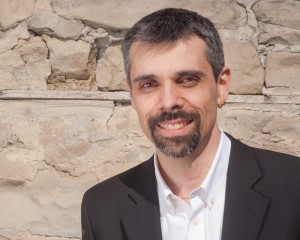 Thank you Adam again for taking the time to discuss your writing and some of your background, truly encouraging to keep at writing regardless of your mood and keep with long term planning.
Again, Adam Dreece is launching his new book The Man of Cloud 9 on September 30th and will be in Edmonton for a couple of book signings where you can grab a copy of the new novel.
The book is also available in digital copy at the following sites:
– Amazon http://smarturl.it/AmzMc9 (This is an internationalized link)
– Amazon US https://www.amazon.com/dp/B01HTVKDD6
– Kobo https://store.kobobooks.com/en-ca/ebook/the-man-of-cloud-9
– Smashwords https://www.smashwords.com/books/view/648114
– Barnes & Noble http://www.barnesandnoble.com/w/the-man-of-cloud-9-adam-dreece/1124066913?ean=2940153109978

The Man of Cloud 9 by Adam Dreece Synopsis

Niko Rafaelo is a brilliant and driven inventor, determined to flip the late 21st century on its head with a new take on a banned technology, nanobots.
In a world that has been battered and bruised for decades by endless natural disasters, Niko’s ambitions are seen as reckless and wasteful.
Following in the footsteps of his Silicon Valley heroes, Niko’s startup takes the planet by storm. But what happens when the corporate beast and Niko’s conscience conflict? And what is his ultimate goal?

“Adam Dreece continues to surprise, enthrall, and sweep us, his avid readers, along – with his elegant prose and insightful story telling. If you, like I, enjoy the sci/fi fantasy genre, you can’t do better than THE MAN OF CLOUD 9.”
– Rene Auberjonois, Avid Reader, Actor/Director